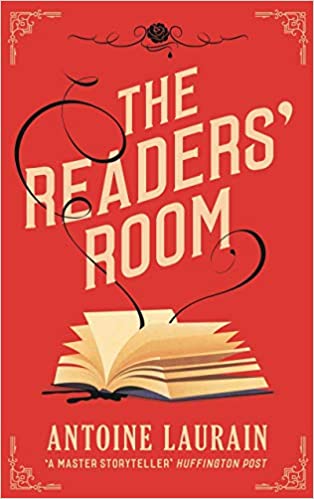 The Readers’ Room, by French author Antoine Laurain, is a brilliant, charming, at times humorous mystery with a bit of everything: intrigue, murder, psychological suspense, an unreliable narrator, and a cameo by Stephen King. Violaine Lepage is the managing editor of a distinguished French publisher’s readers’ room.

The readers’ room is where unsolicited manuscripts are sent by unheralded writers hoping (against the odds) that their work is good enough for publication. The first readers have a mostly fruitless job (“There’s no such thing as an undiscovered genius,” Violaine often murmurs)—but then Sugar Flowers, a literary murder mystery, appears and everyone agrees it is a masterpiece.

Violaine buys the book. It is short-listed for the prestigious French literary prize Prix Goncourt. A series of real-life murders that resemble those in Sugar Flowers catches the attention of a snooping police inspector. And Violaine is in a bad spot, on both counts, because she has no idea who wrote Sugar Flowers. Making matters worse, Violaine was in an airplane crash while flying to sign Stephen King to a contract, and her memory is in tatters.

The Readers’ Room is a genuine masterpiece of literary mystery. The whodunit element sparkles with a brilliant literary sleight-of-hand; what is real and what is less than real is never completely clear. The narrative is smooth and robust. The characters are alluring and eccentric: Violaine with her fading memory and a bevy of personal and professional secrets; a blind reader in the readers’ room; a morose and broken detective with her own share of skeletons. The Readers’ Room is very nearly a perfect, if offbeat, mystery novel.