Nestled at the heart of any mystery is a secret that must be safeguarded at all costs. A web of lies is spun to deceive, deflect and shroud the truth. Should the unthinkable occur and the secret slips out, there is only one recourse for the guilty: murder.

I know I’m speaking to kindred spirits. Therefore, I’ve decided to trust you with my secret. I see murder everywhere. Even the most bucolic and genteel of settings are fair game. I can’t control it. My imagination is a free spirit—with lethal impulses hovering just beneath the surface. Don’t be shocked. I assure you my victims have only died on the printed page.

As my revelations sink in, allow me to tell you about Old Sins Never Die, the sixth book in my mystery series featuring journalist Emmeline Kirby and jewel thief/insurance investigator Gregory Longdon. The kernel of the idea took me unawares, when I visited Grasmere in England’s enchanting Lake District a few years ago.

I stayed at a lovely white-washed, 17th-century hotel called The Swan, which is set in the Lake District National Park. The rolling hills and mountains, lakes and forests, conspired to seduce my soul. In my dreams, I sometimes find myself tramping once again among the lush fields, where honeyed strands of sunlight drizzle warmth among the emerald blades of grass. And the soft susurration of the breeze mingles with the sparkling chatter of a stream as it rushes onward to meet a distant sea. It’s a haven where everyday cares can be forgotten, at least for a little while.

Emmeline and Gregory begged me to take them to Grasmere. After all, they needed a respite from all the nefarious goings on back in London. Alas, my above-mentioned secret intruded on what should have been a romantic interlude. While on a sightseeing trip on Lake Windermere, they overhear a man attempting to hire an international assassin. I ask you, who else would conjure up a contract hit in such an idyllic spot? Probably only me. 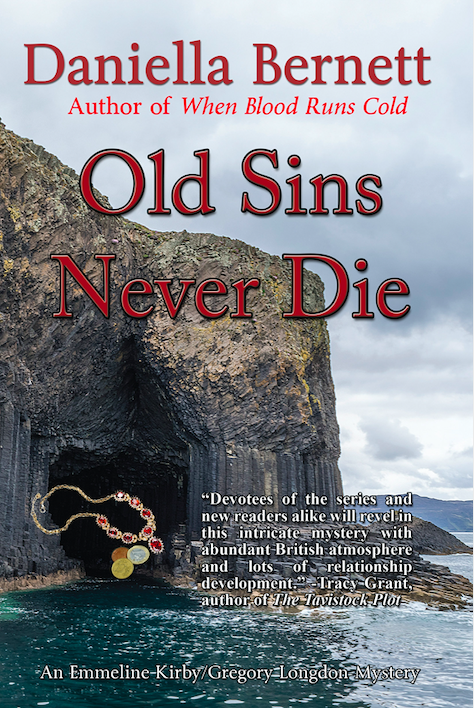 Since I have a wicked streak, I could not make this easy for Emmeline and Gregory. Oh, no. They rush back to London to warn the authorities. But there’s one tiny problem—well, one to start—it’s rather difficult to prevent a killing, if the target is unknown. Emmeline and Gregory really should have stayed in Grasmere because London is a simmering cauldron of danger. As Emmeline pursues a story about shipping magnate Noel Rallis, who is on trial for murder, she discovers that he is blackmailing Lord Desmond Starrett. Desperate to keep his dark past buried, Starrett reluctantly partners with Rallis in a sinister scheme called Poseidon. Prima ballerina Anastasia Tarasova, Rallis’ spurned lover, dangles promises of an exclusive glimpse into a world of treason and greed. However, she’s silenced before she can utter a word.

The hunt for the truth draws Emmeline and Gregory up to Tobermory on the Isle of Mull in Scotland. I fell in love with Tobermory, when I was on a cruise that took me to the Inner Hebrides. The town was built as a fishing port in the late 18th century. Wooded hills surround the bay and brightly painted buildings with shops line the main street along the harbor. If one ventures farther afield, spectacular views of the sea can be had from the cliffs. But as I ambled about that day, murder shadowed my footfalls. I pictured the harbor in November with a bracing wind gathering charcoal clouds in the midnight sky as pelting rain seeped into one’s bones. Gregory was guiding a Zodiac across the harbor’s inky netting of undulating liquid silk, as Emmeline clutched at the rope that ringed the motorized dinghy. At their feet lay a dead man. It would have been a crime to leave this scene out of my story.

Meanwhile when I first caught sight of the nearby uninhabited Isle of Staffa, I was left breathless. The island’s hexagonal columns of basalt rock loom out of the sea, as if the giant hand of an ancient god wrenched it from slumber in a watery underworld. The yawning mouth of Fingal’s Cave beckons with an invitation. I gave in to temptation and featured Staffa because I knew that deep in the bowels of the cave myriad perils were waiting to be unleashed.

In a sane and ordered world, murder is an egregious transgression. But in a mystery, murder takes pride of place. And as I’ve explained, the reader can be certain that I can always find a place for murder and intrigue.

Daniella Bernett is a member of the Mystery Writers of America New York Chapter and the International Thriller Writers. Lead Me Into Danger, Deadly Legacy, From Beyond The Grave, A Checkered Past and When Blood Runs Cold are the other books in the Emmeline Kirby-Gregory Longdon mystery series. She also is the author of two poetry collections, Timeless Allure and Silken Reflections. In her professional life, she is the research manager for a nationally prominent engineering, architectural and construction management firm. Bernett is currently working on Emmeline and Gregory’s next adventure.