Anyone who has attended the Malice Domestic conference knows what a great event it is—focusing on the amateur sleuth mysteries.

But as we all know, things have changed a lot during the past year and a half.

Normally held during the first week of May, the 2020 Malice had to be, of course, canceled. As was the live 2021 conference.

But the tradition of Malice must continue—for the readers and the authors.

So the organizers and board have come up with a different kind of Malice—virtually, of course—with another name.

More Than Malice is being billed as is a festival-style crime convention. It launches July 14 to 17.

More Than Malice is “specially designed to fill the void left when the 2021 live Malice Domestic had to be canceled.

It is a new entity designed to entertain a large audience by bringing together a unique collection of authors exploring every avenue on the crime fiction map,” according to the organizers’ emails.

What’s the difference between the Malice conference and a festival-style crime convention? 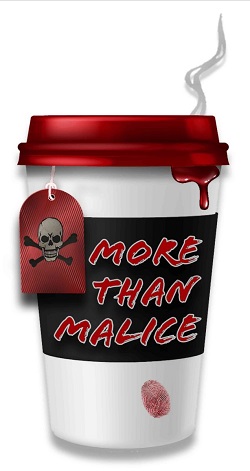 According to the Malice website, “The festival format is popular in the United Kingdom. On the surface, a festival works much like most other crime fiction events: there are panels of authors discussing . . . myriad . . . topics, interviews between authors, and special events with wide appeal. The primary difference is that panelists are invited to participate by the organizers.”

The organizers added: “This is not a recreation of the Malice in-person convention in virtual format. The authors, panels, and events offered will be different than a typical Malice, while also incorporating some of the elements and authors you are familiar with.”

Indeed the authors who will be at More Than Malice are a combination of those who regular attend and those who normally would not attend.

This should make for an exciting “festival” as authors of amateur sleuths, cozies, mysteries, thrillers and more will be represented.

There will be about 20 or so panels and special events spread out through the weekend. These have been pre-recorded but the plan is to have some of the participants on hand during the initial airing of the panels to answer questions from readers.

The Agatha Awards will be presented during a live event on Saturday evening.

More Than Malice kicks off at 6 p.m. Wednesday, July 14th, with opening ceremonies followed at 6:30 p.m. with a conversation between Louise Penny and Verena Rose. Then Author Speed Dating (Round 1) begins at 7 p.m.

But as a bonus, the Agatha Nominee Panels will begin at 3 p.m. June 30 that can be accessed from the Malice website. These are widely available for viewing and not limited to registrants of More Than Malice.

Registration for More Than Malice is $60—considerably less than for an in-person, live event.

And of course, no airfare, hotel or other expenses to worry about. Any money raised helps Malice Domestic deal with the financial hit from cancelling two live conventions, and the costs of filming the panels. 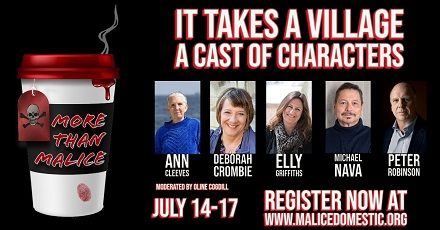 (Frankly, I can't wait to have to pay for airfare, restaurants, hotels, etc. I am so ready to see people in person! Though Zoom events have been great.)

I am moderating the panel “It Takes a Village: A Cast of Characters” in which we discuss those secondary and supporting characters the authors use to build a series.

And I was so pleased with the panel’s authors: Ann Cleeves, Deborah Crombie, Elly Griffiths, Michael Nava and Peter Robinson.

We had a great time, and I am sure the readers will have a great time at all the carefully thought-out panels.

I think we all hope we can again meet in person next year. But for now, we have More Than Malice.