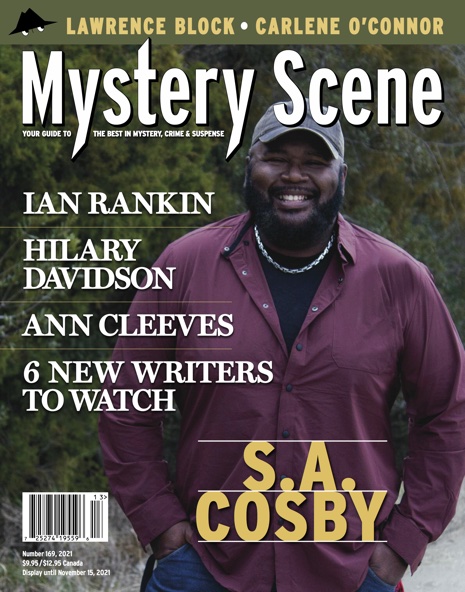 One of my favorite annual offerings in Mystery Scene is our “New Writers to Watch” feature. Oline Cogdill has selected a dazzling and diverse array of new talent that you’ll want to follow. These are the crime fiction voices of tomorrow!

The subject of our cover profile, S.A. Cosby, could easily have been one of the “New Writers to Watch.” He’s only published two novels so far, but the critical consensus could best be summed up as “Wow!” His latest, Razorblade Tears, is a tale of fathers and sons, racism, homophobia, and hard-won redemption. It’s a knockout and Craig Sisterson talks to Cosby in this issue.

Carlene O’Connor fell in love with Ireland by befriending Irish expats in New York City. “I clicked with the humor, the jokes, the wit and intelligence, the music, the sarcasm—and truth be told, I fell in love with way too many Irish men,” says O’Connor. “Darn that accent and charm!” John B. Valeri talks to O’Connor about her two popular cozy series set in the Emerald Isle.

William McIlvanney was a pioneer in what’s come to be called Tartan Noir. His novels featuring Jack Laidlaw of the Glasgow police paved the way for such Scottish luminaries as Denise Mina, Chris Brookmyre, Louise Welsh, and Stuart MacBride. One Scottish writer McIlvanney inspired in particular was Ian Rankin. Now in an act of “literary ventriloquism,” Rankin has completed The Dark Remains, a Laidlaw novel left unfinished at McIlvanney’s death. Our critic calls this prequel to the Laidlaw trilogy “moody and sublime.” Learn how two of the greatest Scottish crime writers collaborated beyond the grave in Craig Sisterson’s interesting article.

Ann Cleeves has a large and enthusiastic readership—a fan base that has been exponentially expanded by the success of the popular Vera and Shetland television programs based on her work. So it’s no surprise that her newest series of novels featuring Detective Matthew Venn in North Devon will be coming to TV, as well. Fans love Cleeves nuanced sense of place—each of her series is infused with the particulars of its setting which, in turn, influences her characters. Don’t miss Oline Cogdill’s interview of Cleeves in this issue.

They’re not going gently into that good night. In fact, these senior sleuths are not going anywhere but after perps. Let our roundup of crime fighters of a certain age give you some interesting ideas for your own golden years.

Hilary Davidson loves the way social issues crop up in mystery fiction. She was a journalist, but says, “Ironically I feel like I can be more truthful with fiction in a lot of ways. The characters aren’t real but the issues are.” John B. Valeri talks with Davidson in this issue.

We have interesting My Book essays from Dennis Palumbo and Daniella Bernett. Finally, in an excerpt from his new memoir, A Writer Prepares, Lawrence Block takes us on a journey through the creative process as he details the evolution of the novel that marked the end of his literary apprenticeship.