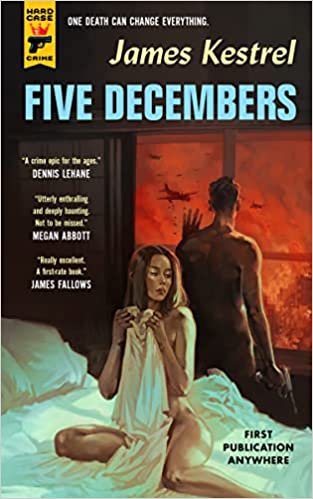 Five Decembers, by the pseudonymous James Kestrel, is a sprawling and captivating crime novel set in the Pacific during World War II. Joe McGrady, a newly minted detective with the Honolulu Police Department, is assigned to investigate the murder of a young white man skinned and hung upside down in a barn. While at the crime scene, McGrady discovers another victim: a young Asian woman, brutally slaughtered and discarded beneath a pile of blankets. The male victim is identified as Henry Kimmel Willard, the nephew of Admiral Kimmel, the commander of the U.S. Navy’s Pacific Fleet headquartered at Pearl Harbor. The identification of Willard and his link to Admiral Kimmel puts pressure on McGrady and his superiors to solve the case quickly.

McGrady follows the suspect, a shadowy man traveling under the name John Smith, across the Pacific. McGrady finds another of Smith’s victims on Wake Island and when he arrives in Hong Kong he is arrested, framed by Smith, for a brutal rape. While McGrady is in police custody, Pearl Harbor is bombed and the Japanese invade Hong Kong. A few months later, McGrady is a prisoner of war on the Japanese mainland, but the murder investigation is far from over. It carries Mc- Grady through all the war’s long years before thundering into a shocking conclusion.

Five Decembers is a surprising and original mystery, but its true power is the raw and vivid portrayal of how war impacts humanity, especially noncombatants. Its sparse descriptive passages are done well enough to provide solemness and splendor at once. McGrady’s world view is altered by his experiences across the years of his captivity, by the people he meets and the places he sees. Five Decembers is an unusually good crime novel that will continue to echo in the reader’s mind long after the last page has been turned.