A Reacher We Can Appreciate
Oline H. Cogdill 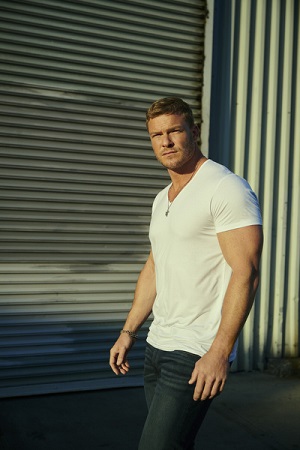 Fans of Lee Child’s venerable series about Jack Reacher, the former military officer turned roaming loner, will find much to like in the eight-part TV series Reacher now streaming on Amazon Prime Video.

And that starts with Alan Ritchson making a formidable presence as Jack Reacher, the decorated major in the U.S. Army Military Police Corps and now self-proclaimed “hobo.”

Yes, Ritchson is tall, very tall, clocking in at six-foot, two-inches, only slightly shorter than how Child’s novels describe Reacher as six-foot, five-inches. But what’s a few inches among friends?

Ritchson is certainly taller than the five-foot, seven-inch Tom Cruise, who attempted to portray the character in the films Jack Reacher (2012) and Jack Reacher: Never Go Back (2016).

Much is made of Ritchson’s size in Reacher—almost every character makes a comment about his height.

And Ritchson also is big, very big with massive arms and chest—much is made of this also with, again, almost every character mentioning his size, including a taxi driver.

Reacher capitalizes on Ritchson’s size with lots of shirtless scenes, including one in the shower. There are no complaints.

But looks aside, Ritchson also embodies the character of Reacher—those long stares, the times when Reacher “said nothing,” as the novels say, and his swagger are on point.

We believe Ritchson is Reacher, and that’s all we ask.

Fans of Child’s novels also will find their sweet spot in the script of Reacher. The entire eight-episode first season is based on Killing Floor, Child's 1997 debut novel. Child’s source material is treated with respect with minor changes, all of which keep the spirit and tone of the novel. Credit showrunner  Nick Santora (Scorpion), who also is the writer and executive producer. 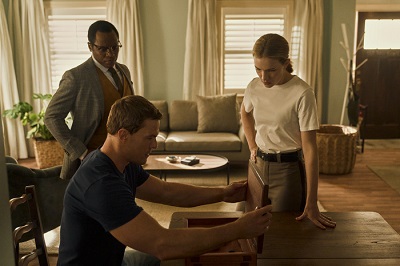 We’ll see the same team again as Reacher already has been renewed for a second season.

Child’s novels have always had a hint of the western as Reacher is the modern Shane, wandering the country, occasionally taking odd jobs (though money is never a problem for him), and getting involved in righting wrongs and cleaning up any criminal activity he finds.

He’s saved most of his miliary salary and pension so he can draw what he needs from any bank. He doesn’t have a spare change of clothes—he just buys a fresh T-shirt and pants, often at thrift stores, when those he’s wearing get dirty, or bloodied.

Aside from his wallet, Reacher only carries a toothbrush though I don’t how Ritchson could fit a toothbrush in those pants.

Using Child’s debut Killing Floor for the entire first season works well, allowing the writers, actors and the audience to be fully immersed in this kind of origin story.

In Reacher, he arrives on a bus in the small town of Margrave, Georgia. He remembers his brother had mentioned that blues musician Blind Blake died there. At a diner, he’s just ordered a peach pie—touted as the best in the state—and is about to take his first bite when the local police barge in, arresting him for murder. 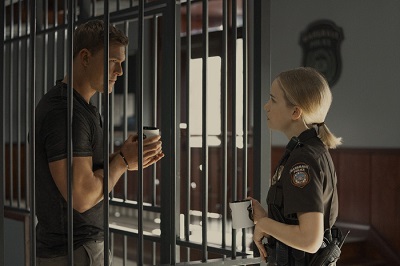 He’s held in a local prison with banker Paul Hubble, who confessed to the murder for which Reacher was arrested. After an attempt on their lives, Hubble tells Reacher he and his family have been threatened by a criminal enterprise that has a long reach.

Like it or not, Reacher is involved. Reacher finds two allies—Oscar Finlay, the chief detective of the Margrave Police Department and Roscoe Conklin, a police officer.

Oscar (played by Malcolm Goodwin) and Roscoe (played by Willa Fitzgerald) are, in their own way, outsiders as is Reacher.

Oscar is Harvard-educated, prefers tweed suits and recently relocated to Margrave. As a black man, he stands out in the mostly white town.

Roscoe’s family was one of the founders of Margrave, but her strong investigative skills are often discounted because she is a woman.

Rounding out the cast are Bruce McGill (Rizzoli and Isles, Animal House) as Grover Teale, Margrave’s mayor, and Maria Sten as Frances Neagley, a former army investigator who worked with Reacher and is now a private detective.

Ritchson has had a string of roles in movies and television shows. According to several sources, Ritchson was first noticed when he appeared on the third season of American Idol in 2004 as one of the top 87 contestants. Many sources mention his striptease in one episode. Judge Paula Adbul apparently was quite interested.

Reacher is action-packed—of course he can take on 10 men and win—and a bit graphic in its violence, sometimes over-the-top.

But Reacher never falters in its entertainment values, and is beautifully photographed with attention to details.

Fans will also spot a familiar face in a cameo role in the last episode of Reacher.

And amid all the fights, car chases, fires and more, most of us also worry if Reacher ever gets to taste that peach pie.