Books
Under Lock and Skeleton Key 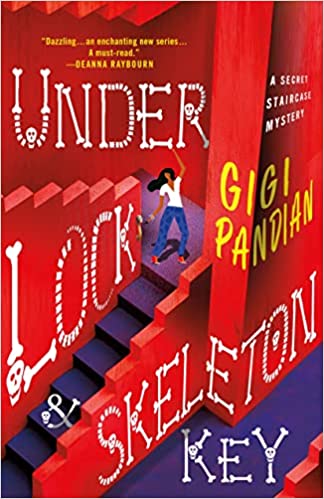 Tempest Raj comes from a long line of magicians, and was, in fact, a successful Vegas illusionist—that is until her show implodes, costing her career and almost her life. Tempest at first blames it on her family curse (which states that the oldest child dies by magic), but soon realizes she was sabotaged by her stage double.

After selling off everything she owns to pay for the damages, she heads home to California to lick her wounds and hopefully start over. Her first mission is to unlock the secrets behind her mother’s disappearance five years earlier. Unfortunately, her bad luck follows her when her double-crossing stage double ends up murdered inside one of the houses her dad’s Secret Staircase Construction company is working on.

Tempest is determined to solve the mystery, make a stand, and redeem her reputation, but she’ll need help to do that and hometown friends and family to come to her aid. This super series inception has an eclectic cast of characters (including Tempest’s quirky family), hidden rooms, riddles, and good food (plus delicious recipes at the end). Then there’s Tempest, a mixed bag of ethnicities with an impressive bag of tricks, an interesting mode of clue-deducing, and an expertise at chicanery. She’s a woman readers will fall in love with.