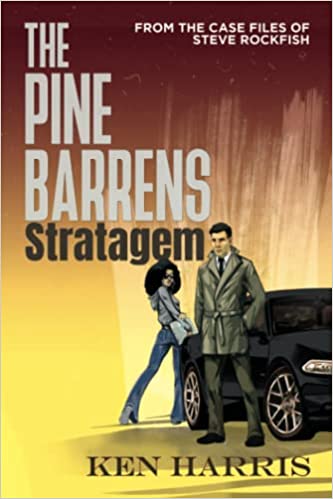 It’s the third month of Maryland’s stay-at-home order and private eye Steve Rockfish— the protagonist of Ken Harris’ stellar debut, The Pine Barrens Stratagem—is getting desperate. Surveilling unfaithful spouses used to be his bread-and-butter, but then COVID-19 pressed pause on a majority of extramarital affairs. With no work coming in, Rockfish worries creditors will repossess his pride and joy, a 2015 Dodge Challenger named Lana.

He’s contemplating hiding places for the car when true crime podcast producer Angel Davenport calls from Los Angeles with a solution to the PI’s problems. Davenport has an idea for a podcast that he believes all the major streaming platforms will want to adapt as their next big docuseries: an inquiry into rumors that, in the 1940s, a dozen babies were illegally adopted out after their unwed mothers vanished from a New Jersey midwife’s farm. Unfortunately, current events have curtailed Davenport’s ability to research the story in person, which is where Rockfish comes in.

After decamping to the Garden State, Rockfish teams up with aspiring sleuth Jawnie McGee, whose great-grandfather—a local cop—was murdered in the 1940s while looking into the alleged child trafficking operation. The duo’s investigation uncovers not only past truths, but present-day crimes perpetrated by very powerful people.

Harris makes brilliant use of the pandemic to shape not just his premise, but his characters’ every encounter. The multifaceted mystery is clever, the wry narrative is action-packed and briskly paced, and the gratifying conclusion will leave fans clamoring for a sequel.