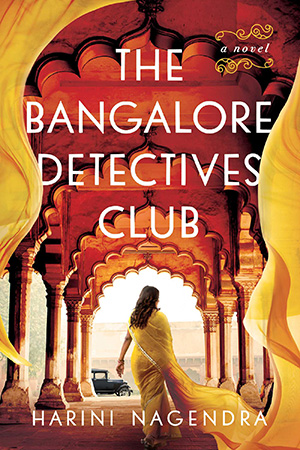 What a joy it is to read a first novel that truly sings, as Harini Nagendra’s first effort does. Set in Bangalore, India, in 1921, the book follows Kaveri Murthy, a new bride who has been married for a while but has just come to live with her husband. She and her husband Ramu, a doctor, are adjusting to married life and slowly discovering that they like being married. As natives in a land run by another country, they are in an uncomfortable position, and in 1921, stirrings of freedom were afoot in India. However, closer to home, Kaveri is learning to cook, finding ways to take a swim, and hoping to continue her mathematical studies.

When the Murthys attend an event at a country club with a mix of British and Indian couples, Kaveri discovers she has much to learn about living in Bangalore and functioning as a high-society wife. During the dinner, she slips out into the garden where she sees her milkman being threatened by a beautiful woman, and then a bit later, the woman held by her throat against a tree by a strange man. She’s unsure what to do with this knowledge—beyond the fact that she’s been slipping the milkman’s young brother a few scraps of food as the man seems to have abandoned his family—but when a dead body is discovered in the garden later that night, her mathematical and curious mind sets to work.

The milkman seems to be the likeliest culprit, and when his wife is later assaulted, things look dark for him. Kaveri feels curious, but also obligated, as she’s become fond of the milkman’s young brother and wants to help. It’s not in her to sit at home and cook all day while she waits for her husband, so she gets to work. Luckily, her mother-in-law has left to visit her sister and Kaveri finds time not only for detection, but for studying math.

Nagendra sets up a nice network for Kaveri. There’s an older woman across the street who accompanies her on some of her investigating and proves very helpful, as she’s lived in Bangalore for so long she knows almost everyone. When the two women venture further afield to areas of the city considered unsafe, in particular unsafe for women, it’s Kaveri who takes the lead. In this way, they make a good team.

Kaveri is also supported by her husband, who welcomes her curiosity, her desire to learn, and her growing expertise at cooking. (He notices his pants are getting tighter.) She’s also made a fan of Inspector Ismail, who agrees to include her and Ramu in the official investigation.

This was a lovely novel of exploration: Kaveri’s discovery of Bangalore, the Murthys learning that their marriage will be a strong and loving one, and the journey of solving the murder of the man in the garden. This is a book for fans of the traditional mystery novel—Sherlock Holmes is even referenced. The setting is rich and the characters are wonderful, with room for further development in future books. I am now counting myself a fan and am looking forward very much to book two.