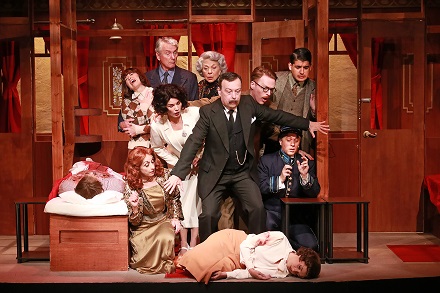 I have said several times that Agatha Christie never goes out of style and she seems to be having a resurgence in popularity.

The new novel The Christie Affair by Nina de Gramont takes a new view of the 11 days Dame Christie disappeared—a vanishing that has never been explained; The Christie Affair now is in development for a television series planned for 2023. The television series Why Didn't They Ask Evans? directed by Hugh Laurie currently is available. Authors such as Val McDermid, Alyssa Cole, Lucy Foley and Elly Griffiths are contributing short stories to the collection Marple: Twelve New Mysteries, to be published in September

Christie’s Murder on the Orient Express also has a new life, first with the film directed by Kenneth Branagh and now with a retooled play adaptation by U.S. playwright Ken Ludwig, best known for Lend Me a Tenor.

Ludwig’s Murder on the Orient Express has been produced at a variety of venues including McCarter Theatre Center in Princeton, N.J., and theaters in Houston, Philadelphia, Japan, Pittsburgh, Milwaukee, Kalamazoo, Michigan, among others. A production is currently at the Chichester Festival Theatre in West Sussex, England. It will open at the highly respected Drury Lane in suburban Chicago.

So how is the new Murder on the Orient Express?

Here is a review by South Florida’s highly respected theater critic Bill Hirschman of Florida Theater on Stage on the currently production at Actors Playhouse in Coral Gables. Full disclosure—Bill is my husband. I also saw the production with him on opening night and completely agree.

Murder on the Orient Express Reimagined as Comic Trip

Do not go to Actors’ Playhouse’s stage production of Murder on the Orient Express expecting the grim locked-room mystery at the heart of the films with Albert Finney or Kenneth Branagh, or even the gravitas of Agatha Christie herself.

This 2017 edition, perhaps the only one written for the stage, is penned by Ken Ludwig, the popular playwright best known for such expert farces as Lend Me A Tenor and Moon Over Buffalo.

So, if you can wipe the tone of those earlier efforts from your mind, you will likely find yourself chuckling much of the night at this cast of skilled South Florida theater veterans having a good time turning Christie into a cute, often funny two-hour comedy sketch.

At one point the voluble and five-time married Mrs. Hubbard tells a character, “You know you remind me of one of my husbands.” The character asks, “Which one?” Not waiting for the rimshot, she answers, “The next one.”

At one point, a suspect bristles that his lover will be questioned. He says, “Well, I don’t like it! Do you understand? And you can put that in your meerschaum pipe and smoke it!” To which Poirot’s friend retorts, “That is Sherlock Holmes.”

A photo is, indeed, worth a thousand words: Glimpse the tableau above and you’ll get the intended tenor perfectly.

The plot does remain rooted in Christie’s brilliant if complex and impossibly convoluted tale of revenge written in 1934 and turned into radio plays, television editions, Sidney Lumet’s 1972 film and Branagh’s 2017 cinema outing, both of which had jabs of humor about detective Hercule Poirot’s fussy demeanor and the aristocrats’ hauteur.

Here, there are a few plot changes and additions, and the number of suspects has shrunk from 13 to 8 for Poirot to interrogate. So, for a moment or two, you wonder whether Christie’s ingenious solution will remain intact. But never fear. (In the pre-curtain speech opening night, director David Arisco asked how many people knew whodunit and amazingly only a smattering of hands were raised. Where have they been?)

In keeping with Ludwig’s vision and Arisco’s strength in comedies, most of the characters – and they are now Characters – are played just this side of over-the-top with a League of Nations of accents.  No one onstage or backstage is taking any of this seriously as a murder mystery. But if you accept their approach, Arisco has a skilled gang for his partners in crime.

Terry Hardcastle, who has been a stalwart at this theater and around the country for decades racking up Carbonells, makes a more solid serious Poirot who exudes the detective’s unwavering curiosity. As the straight man to the rest of the characters, he doesn’t get as many opportunities for laughs other than rolling his eyes at the antics, but he provides the fulcrum for the evening.

But heading the acting list of quirky oddballs is Irene Adjan’s annoyingly nasal bray with an attitude, the widow from Minnesota, Mrs. Hubbard. Adjan‘s much honored local career has encompassed broad farce in Summer Shorts and affecting drama like The Cake. Here she gets to have a blast making Mrs. Hubbard someone you’d hate to be stuck with on a snowbound train for three days.

But the rest of the cast also capably lets themselves go inhabiting intentionally one-dimensional cartoon characters: Lourelene Snedeker  as the aging Russian émigré Princess Dragomiroff; Mallory Newbrough as the fretful Swedish companion Greta Ohlson, a part far removed from her Equus horsewoman or her Beehive Janis Joplin; Krystal Millie Valdes as Debenham; Gaby Tortoledo as the lovely married countess whom Poirot gets a crush on; Alexander Blanco as the murder victim’s aide; Seth Trucks as the busiest train conductor in Europe; Michael McKenzie as the rail line’s executive (we saw him for a few seconds this week on a new Law & Order episode) and Iain Batchelor as both Valdes’s Scottish military beau and the soon-to-die mafiaso Ratchett.

If you’re going to adhere to Ludwig’s vision, you would be hard pressed to find local director better suited to this than Arisco, who can direct high tragedy handily, but whose skill at light comedy is close to unmatched down here.

For all the humor, Arisco and Co. respect that Ludwig does change gears for the finale more in keeping with introspective facet of the original in which Poirot struggles to come to terms with what he sees as a moral dilemma.

Some of the audience gasped at the first sight of the set pieces designed by Tim Bennett and executed by Production Manager Carlos Correa and Technical Director Gene Seyffer. The entire stage in the upstairs auditorium contains two halves of the train’s exterior, and then when the halves slide back into the wings, revealing the lounge car, and, then the whole thing slides offstage to reveal three adjoining compartments. From a technical and mechanical standpoint, it is a bit of a marvel, although the time required to move then in the often changing scenes does drag the pace down a bit.

Ellis Tillman, the dean of local costuming, once again devises character-revealing garb for the cast, notably the white travelling outfit for the countess and the ornate regalia for the princess.

Prior to the pandemic, this was a popular title for regional theaters across the country including the Asolo Repertory in Sarasota (with local Gregg Weiner in the cast) which closed just before the virus exploded, but never made it to Broadway.

Overall, it’s a pleasant amusing ride to buy a ticket for.

Photo: What? Another body? Poirot hold back the suspects in Actors’ Playhouse’s Murder on the Orient Express / Photo by Alberto Romeu.