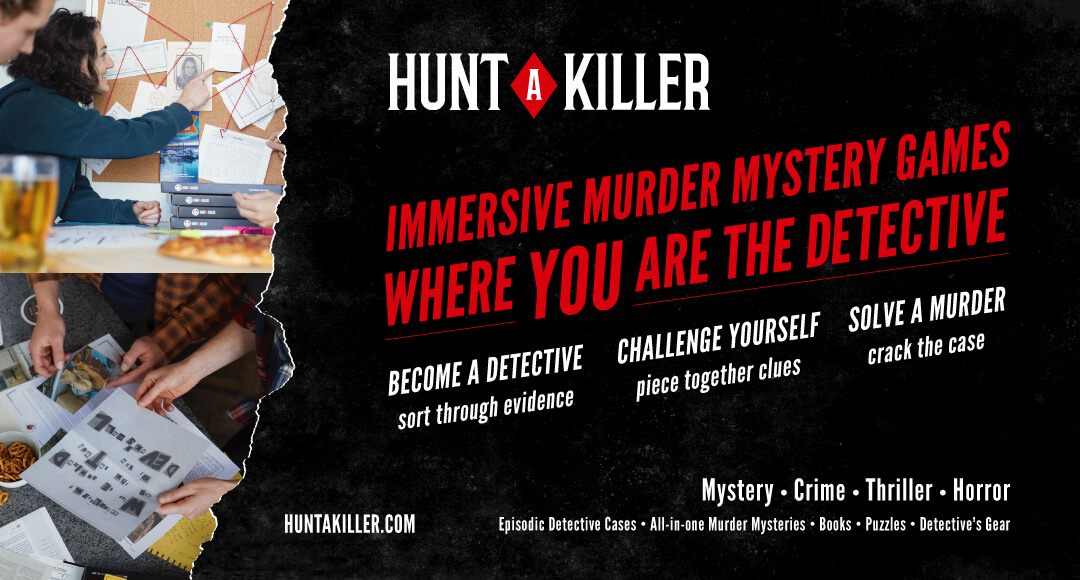 "Solve a cold case, find a missing friend, bring justice to bear... hunt a killer?? I know you have what it takes, Detective. Will you help me find out what happened?"

December is the "Month of Mystery" at Hunt a Killer, the immersive murder mystery game site that aims to bring your holiday game night to new heights by putting you and your fellow detectives on the case. You'll sort through evidence like autopsy reports and physical items, piecing together clues along with interactive digital gameplay in order to solve the crime.

Players can choose from three types of games: Hunt a Killer's traditional monthly subscription told through "episodes" or boxes, wherein each box is filled with clues that bring players closer a solution each month; six-episode boxed-sets featuring previous games that allow players to tackle all 10–15 hours of gameplay at once; or single-experience premium games, perfect for one night of killer fun.

In addition to the very best promotional discounts of the year, the "Month of Mystery: 30 days. 30 deals. 30 moments of mystery" treats mystery lovers to "The Larksburg Librarian," an exclusive online short story written by Adam Mueller that will be told in daily increments throughout the month.

From what I heard, Randy was finishing up for the day and wanted to make sure the mayor had everything he needed before she left. She knocked on his door but he didn’t answer. Maybe she thought he was taking a nap. For whatever reason, she didn’t knock again until she had her jacket and her bag, ready to go. When De Smedt didn’t answer again, she helped herself into his office, and that’s when she found his body…. —Read "The Larksburg Librarian" at www.huntakiller.com/month-of-mystery/

For their special month, Hunt a Killer has also set up "What Happened...?" a sampler of eight fictional web-based experiences, crafted by Hunt a Killer, which jump start detectives into the action of several of their popular games. Just like a real detective, you must establish means, motives, and opportunity to figure out who the killer is and solve the case. More than just a murder mystery, each case tells a whole story wherein everyone has a secret to uncover.

Perfect for mystery and crime junkies, each Hunt a Killer box is a complete murder mystery to solve. Choose from small, medium, and large cases, puzzles, books, or a monthly subscription membership. With various game styles, prices, difficulty levels, and storylines, you can customize game night to your interests and skill level.