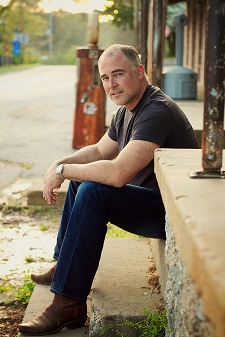 Before he started the multi-Edgar-nominated Quinn Colson series and took over the late Robert B. Parker’s Spenser series, Ace Atkins launched his first series about Nick Travers, a music historian at Tulane University and sometime sleuth.

In this series, Atkins delivered insightful plots that explored the history of music, looking at the singers who may have been forgotten but whose legacy endured. For example, in Dark End of the Street, Nick Travers searches for the old-style singers who could sing the blues so deep and mournful they wrenched your heart.

In my review of Dark End of the Street, I said, “Atkins plots the origins of soul music as well as the presence of organized crime and the infiltration of casinos in the Mississippi Delta in his highly entertaining, solidly plotted novel. After two well-received mysteries featuring blues tracker Nick Travers, Atkins proves his skill at creating realistic characters, evil villains, and an atmosphere so rich you can smell the Delta countryside and hear the bottleneck guitars.”

In the Nick Travers series, Atkins showed that for some, music is a cultural link.

For others, music is a balm for a troubled city in the late 1960s. “The music soaked into red shag carpet walls of the old movie theater that served as their studio and out through the newly barred windows and into the emerging ghetto. He played as if somehow dance music could solve Memphis’ problems. But Memphis kept boiling. Soul kept dying.”—Dark End of the Street

I liked this series a lot and was sad when it ended, though I’m delighted that Atkins has gone on to create even better novels with his series about Quinn Colson, a former Army Ranger who is now the sheriff of his small, corrupt Mississippi hometown. 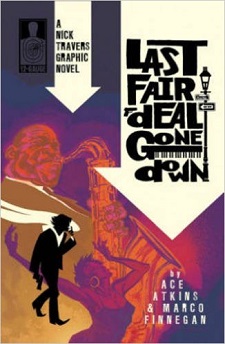 Nick is about to return with a series of graphic novels based on Atkins’ series.

Nick Travers Vol 1: Last Fair Deal Gone Down is set to come out at the end of April from 12 Gauge Comics LLC. Atkins’ story is accompanied by artist Marco Finnegan’s illustrations and Chris Brunner’s cover.

Since part of its title is Vol. 1, we can look forward to more adaptations via graphic novel.

The synopsis for Last Fair Deal Gone Down is, according the publisher: “It's Christmas in New Orleans. For many, it's the best season of the year. But instead of spending time with the people he cares about, Nick Travers is investigating the death of his friend, Fats. At first it appears that Fats took his own life, but Nick quickly discovers that the saxophone is missing from Fats' apartment. He soon learns that there is more to the story than a simple suicide, and the woman who Fats had been paying to keep him company may hold the answers.”

Atkins’ novels have been a longtime personal favorite—from his Nick Travers novels, his historical fiction such as Infamous based on the life of Machine Gun Kelly and Devil’s Garden that looked at the scandal of silent-screen comedy star Roscoe “Fatty” Arbuckle, as well as his Quinn Colson series and his continuation of Robert B. Parker’s Spenser series.

Atkins’ next Quinn Colson novel is The Innocents, which comes out July 216; his next Spenser novel is Slow Burn, which comes out in May. Atkins also will have stories in the new collections Mississippi Noir and New Orleans Noir.