While different in many ways, both these shows make a good pairing. 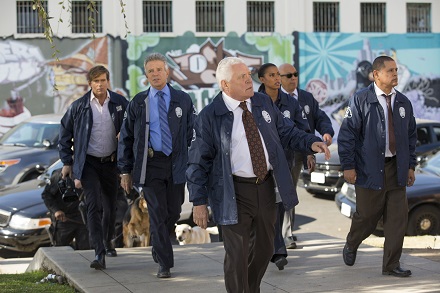 TNT’s Major Crimes is back for a five-episode finale of its fourth season and, for the first time, is concentrating on only one crime.

Major Crimes, for those just getting around to this series, began as a spin-off of The Closer, which starred Kyra Sedgwick as Deputy Police Chief Brenda Johnson.

I loved The Closer and especially Sedgwick’s performance as the prickly, righteous, and compelling Johnson. And I am an avid fan of Major Crimes.

Major Crimes stars Mary McDonnell as Captain Sharon Raydor, the head of its Major Crimes Division. But Raydor leads a team and makes the investigations a true team effort. 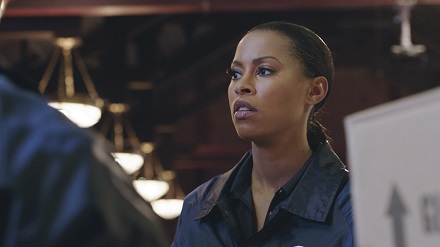 “Hindsight,” the title of Major Crimes’ fourth season finale that began last Monday, is showing how one crime is affecting a community, the officers, prosecutor, and medical examiner, as well as how this new crime echoes back to another crime.

It’s a bold move, and, judging from the first two episodes, will play out beautifully.

Without giving away any spoilers, the story arc begins with the murder of a young mother and her three-year-old son, who were killed while driving through gang-infested territory. The detectives believe that the killers mistook the victims’ car for the automobile an enemy would be driving.

But is it just a case of mistaken identity?

Soon the squad learns that the gun used in the murder is linked to another murder committed 12 years before. The gun has been missing all these years. And that former investigation involved the murders of several people, including an off-duty LAPD cop and a deputy district attorney.

Lt. Michael Tao’s former partner, Mark Hickman, perjured himself on the stand in an attempt to close the case, and was fired. Tao (played by Michael Paul Chan) still holds a grudge against Hickman (played by Jason Gedrick), who, in turn, also despises his former partner and the entire police force.

Detective Amy Sykes (played by Kearran Giovanni) becomes even more involved than her fellow officers when she speaks with Hickman, who also tries to insinuate himself in the new investigation.

Major Crimes often focuses on different members of the squad and, apparently, it is Sykes’ turn.

Giovanni is a compelling actress, who made her career on Broadway before appearing as Dr. Vivian Wright on ABC’s One Life to Live from 2009 to series finale in 2012.

Since Giovanni has shown Sykes’ maturation from a cop, who had to prove herself immediately to her fellow officers when she first joined the squad, to the thoughtful, intelligent detective she is now. One of the ironies is that Sykes may have been new but she wasn’t a rookie, and came with a lot of investigative skills. A running joke is how tech savvy she is as opposed to a couple of her colleagues.

Major Crimes’ season finale is proving to be a nuanced miniseries.

Major Crimes airs at 9 p.m. Mondays on TNT, with frequent encores, and is available on demand. 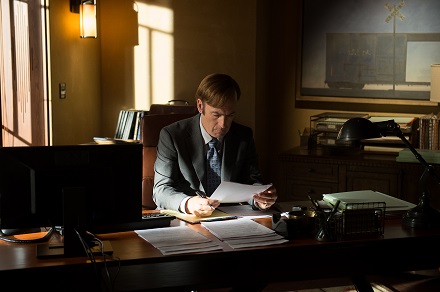 Like Major Crimes, Better Call Saul also is a spin-off, of a sorts, from a previous series, the brilliant Breaking Bad.

In Breaking Bad, attorney Saul Goodman was a bit of a buffoon, handling the legal matters of meth maker Walter White and a few other unsavory clients. He often added a bit of dark humor to Breaking Bad.

It would have been easy to make Better Call Saul a comedy with Saul having a different outlandish client each week.

But thankfully, the creators went the serious route, and this has made all the difference in the nuanced Better Call Saul, which airs at 10 p.m. Mondays on AMC.

Better Call Saul has that perfect marriage between series creator Vince Gilligan and a multi-layered performance by Bob Odenkirk.

At the end of Breaking Bad, Saul was getting on a bus to escape the criminal enterprises that were about to blow up in Albuquerque. As he leaves, Saul comments, “The best-case scenario, I’ll end up managing a Cinnabon in Omaha.”

And that is where we find Saul, with a dark moustache and dark hair, minding his own business, managing that snack place in a mall, taking out the trash, cleaning out the machines. 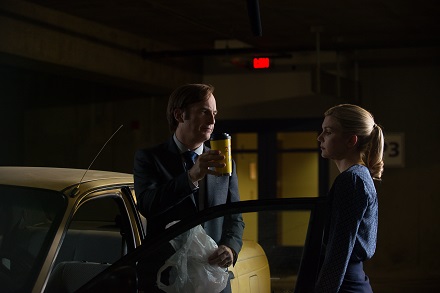 Saul’s new life was the opening for the first season and also for the second season.

But Better Call Saul is not about his new life.

The AMC series is about his old life—taking place six years in Albuquerque before Walter White came on the scene—and shows how Saul started his metamorphosis from a sleazy lawyer, born Jimmy McGill, to the flashy Saul.

As Jimmy McGill, he was known as “Slippin Jimmy,” a Chicago hustler making a nice living collecting money for his pain and suffering because of his penchant for falling on ice patches on Michigan Avenue and State Street.

Season One was a kind of Cain-and-Abel look at Jimmy and his reclusive brother, Chuck (the wonderful Michael McKean) who bring sibling rivalry to a different level.

In Season Two, Jimmy joins a high-profile law firm. But the man is still a con man at heart, and while he well knows the law he can’t help but try to bend it a bit.

Odenkirk has always been a terrific character actor and to see him take the reins here is nothing short of inspiring. Odenkirk started as a comedian—check out his series Mr. Show—but his transition to drama is credible. We never get the hint that Odenkirk is treating the show as a sitcom but as a serious look at a very flawed man who has sunk so low. Gallows humor, which plays a big part in the series, must be treated as serious as possible or it won’t work.

In a review, The New York Times posed this question: “Is Jimmy a good guy overcoming bad tendencies, or a bad guy who’s fooling himself?”

It will be fun to explore just who Jimmy is.

A BIT OF TRIVIA

For Breaking Bad fans—look for little Easter eggs throughout Better Call Saul as there will be several references. Here are two from the second season’s first episode which I found referenced by other reviewers.

Zafiro Añejo, the ultra-expensive tequila that the foul-mouthed stockbroker buys for Saul and his guest, doesn’t exist. It is a fictional brand that showed up a couple of times in Breaking Bad. Gus Fring used Zafiro Añejo poison Don Eladio and the members of the Mexican cartel in the season four Breaking Bad episode “Salud.”

And Ken, that nasty stockbroker who is obviously conning others, as Saul will do to him, was played by Kyle Bornheimer. Ken appeared in the season three episode “Cancer Man” episode of Breaking Bad. Even more obnoxious, Ken with the license plate “KEN WINS” pulls into a gas station and angers Walter White with his attitude. In turn, Walter sabotages Ken’s car, which soon explodes.