Fine Work From Hurwitz and Gaylin 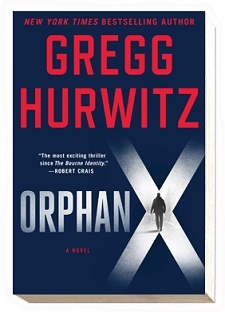 One of the reasons I enjoy mystery fiction so much is the diversity of characters, places, and plots that the genre offers.

Readers can immerse themselves in the lightest of mysteries, the most hard-boiled of stories, or an action-packed thriller and find satisfaction in each.

While the plot is always important, for most of us the characters are paramount to the story.

That’s why when I thought about the two most important novels that I read this month—mysteries whose stories have stuck with me long after I turned the pages—it was no surprise that each is so different.

The two novels are Orphan X by Gregg Hurwitz and What Remains of Me by Alison Gaylin.

Hurwitz’s novel is pure thriller, with nonstop action from the first page to the last. Gaylin’s novel is more of a psychological study, a solid story that is neither a cozy nor a hard-boiled novel.

And while the lead characters in both novels are vastly different, they are both well-shaped characters whose heart and soul comes through clearly in the stories. The plots are pretty good, too.

Orphan X launches a new series by Hurwitz, who is best known for his stand-alone thrillers. Orphan X is Evan Smoak, who since childhood was trained to be an assassin under the government’s secret Orphan Program.

It wasn’t difficult teaching him to kill, Evan’s handler told him, “The hard part is keeping you human.” But Evan left that program and is now on his own mission—to help those in need.

Hurwitz keeps Orphan X's action believable while offering a character study of the electrifying Evan, who must choose daily to do good. 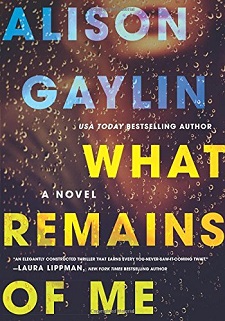 Gaylin, best known for her Brenna Spector series, offers a perceptive, intriguing stand-alone in What Remains of Me.

Gaylin’s lead character is Kelly Lund, who at 17 years old is sentenced to 25 years in prison after being convicted of killing Oscar-nominated director John McFadden during a party in his home. Then, five years after her release, Kelly is suspected of murdering her father-in-law in a similar way.

What Remains of Me is about a small group of Hollywood teens and the adults they have become in their late 40s.

But What Remains of Me also is a tale of Hollywood, of fleeting fame, of unreliable narrators, including the media, and image.

We live in an era in which privacy is a commodity to be played with. A person can be a hero in the press one day, the villain the next. A photograph of a person taken at an odd moment suddenly becomes a testament to who they really are.

It would be hard at this point for me to choose which one of these novels I liked better.

But fortunately, as readers, we don’t have to choose. We can read both.

Orphan X and What Remains of Me just came out this month (February 2016).

Both Hurwitz and Gaylin also are on tour, and will be featured in the next issue of Mystery Scene magazine, which will be out soon.