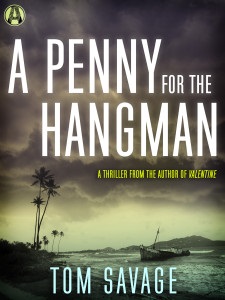 Tom Savage finds himself in a situation he thought he passed years ago.

He can be considered a new author.

And Savage is certainly making up for those 14 years.

In addition to A Penny for the Hangman, Savage is self-publishing four ebooks: two novels he wrote as T.J. Phillips for Berkley Prime Crime will be available, along with a collection of seven short stories reprinted from other publications, one novella under the title Jumbie Tea and Other Things, and a never-before-published novella titled Arden Court.

And if that isn’t enough, Savage just found out—on his birthday, September 2, no less—that Random House has accepted his second new novel. Widow’s Run will be published by Random House next year. Nice birthday present.

Both A Penny for the Hangman and Widow’s Run will take place in St. Thomas, Virgin Islands.

“I haven't been this busy in years!” Savage said in an email to Mystery Scene.

As for being back on the publishing scene, Savage simply says, “It feels wonderful to be publishing again.”

Tom Savage has been a part of the mystery community for decades.

For years, he worked at the New York-based Murder Ink, the world’s first mystery bookstore.

He has served as a director on the national board of Mystery Writers of America, and he’s served several times on the best novel committees for MWA’s Edgar Awards and for the International Association of Crime Writer’s Hammett Prize. He is a founding member of MWA’s Mentor Program, assessing and encouraging new mystery writers.

As an author, Savage also wrote the suspense novels Precipice, Valentine, The Inheritance, and Scavenger. And under the name of T. J. Phillips he wrote Dance of the Mongoose and Woman in the Dark.

His short stories, which will now be published in Jumbie Tea and Other Things, have appeared in Alfred Hitchcock Mystery Magazine, Ellery Queen Mystery Magazine, and anthologies edited by Lawrence Block, Harlan Coben, and Michael Connelly. His short story “The Method in Her Madness” was nominated for the Barry Award for Best Mystery Short Story of 2005. His bestselling novel, Valentine, was made into a Warner Bros. film.

So why did Savage basically drop out of publishing? After all, his novels under his own name and as T.J. Phillips were well received.

The answer to that question is a bit complicated, he told me. So complicated that he wrote an essay about it from which he asked me to quote.

“I worked for two years on a really ambitious thriller to follow Scavenger, but I picked the wrong subject, the then-unknown abuse scandal in the Catholic Church. I knew about it beforehand, from an investigative reporter friend who was working on the story in Connecticut long before it became public knowledge. I handed the manuscript to my agent just as the worldwide headlines arrived. Oops! My prophetic thriller was instantly Yesterday’s News, and no one would touch it. Two years down the drain.”

Then Savage had some personal losses. His mother died in 2003 and his sister a year later. “And for a while I wasn’t able to write anything,” he said in the essay.

Then came more work losses. In 2006, Murder Ink, the bookstore where he worked for years, closed its doors forever, so he was suddenly unemployed. Then he parted ways with his agent of 15 years.

“I spent the next three years sitting around my Greenwich Village apartment in a bathrobe. I continued to write novel after novel, a grand total of four, but I didn’t show them to anyone. I was too busy feeling sorry for myself,” Savage wrote.

Eventually, Savage got a little help from his friends.

“S. J. Rozan, my writer friend who lives near me, yanked me out of my house one day and dragged me, kicking and screaming, to a meeting of her writing group. I’d always sworn to eschew any sort of reading/commenting group situation, so this was the last thing I needed—or so I thought. But once I got there and saw how these people worked, how they helped and encouraged one another, I was hooked. I liked their company, but if I wanted to join them, I’d have to bring samples of my own work-in-progress. So I started writing in earnest again, and soon I was writing a new novel, A Penny For The Hangman,” he wrote.

“Next thing you know, I had a completed manuscript, and the group told me that it was time for me to go out and find a new agent,” he added.

And so he did.

Savage says he found an agent almost immediately. She knew his work and, even better, she liked A Penny for the Hangman. Then came the long process of finding a publisher. His agent shopped the manuscript around for two years and Savage was faced with the reality of how publishing had changed in nearly a decade and a half.

“I’d been away for a long time, and I was unaware of the dramatic changes in our industry. Everyone I ever worked with was gone, and the new, young editors at the reconfigured publishing houses (now known as the “Big Six”) had never heard of me. Fact: A writer in his fifties who hasn’t published in years is actually in a worse position than a new kid starting out with a clean slate. Who knew?” Savage said in the essay.

The A Penny for the Hangman manuscript made the rounds for two years, “and racked up an impressive number of rejections from editors who obviously didn’t even look at it,” he said.

“And why should they? It isn’t just the industry that’s different—the really seismic change of the last decade is in the book-buying public. My thriller doesn’t have teenage vampires or shape shifters or ultra-right-wing Special Ops agents, and there isn’t a single “shade of grey” in sight, let alone fifty.  . . . I was out of step with the new reality, and I was beginning to despair, bracing myself to slink off to the sidelines once more,” he said.

But the new dynamics of publishing turned out to work in his favor. Alibi, a new Random House line of electronic-only books, was interested in acquiring the rights. His agent hammered out a contract. And his friends suggested he also think about self-publishing those manuscripts he had been working on.

“My writer friends encouraged me to take a chance, to step out into the void where no writer has gone before. Ebooks are uncharted territory, they told me, the new frontier in publishing, and somebody has to be Neil Armstrong! And while you’re at it, they added, start a website (I did) and a blog (ditto) and bring back all your out-of-print titles as ebooks (double ditto). Thanks to them, I’m published again, and it feels like I’m coming back to life. Which is exactly what I’m doing,” Savage said.

“I guess I'm the new kind of author—a mix of traditional and self-pubbing. A lot of writers are doing that these days,” Savage told me in an email.

And Savage says there is a moral to his story: “Writers need one another, and we need agents. We’re entering a brave new world of publishing, and—thanks to my agent and my writer friends—I’m in the first launch. I don’t know what I’m about to discover, but the view from here is lovely,” he added in his essay.