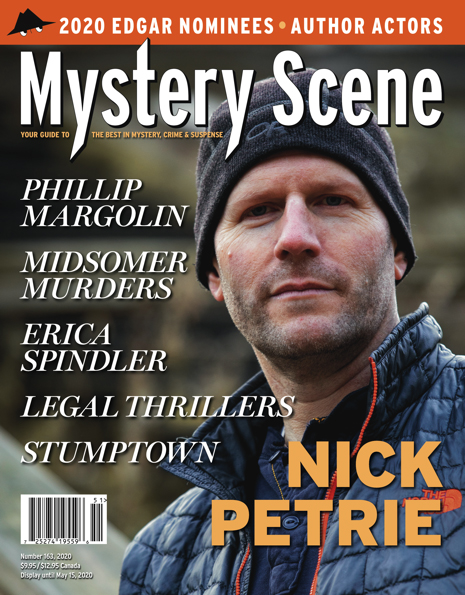 Nick Petrie began meeting military veterans while working as a home inspector. Those conversations in basements, attics, and front yards with men and women returning from their tours of duty gave Petrie an insight into their struggles with civilian life. The result is Petrie’s Peter Ash, a veteran struggling with PTSD, and one of thriller fiction’s new stars. Oline Cogdill talks to the author in this issue.

Not all writers are content to stay behind the keyboard. Plenty of them, including many mystery authors, have stepped into the spotlight in various movies, TV shows, and commercials. Michael Mallory gives us a cast list in “Ready for a Close-up: Crime Writers Caught on Camera.”

One of my favorite features is our “Fave Raves of the Year” chosen annually by Mystery Scene critics. I’m sure to find overlooked gems in these recommendations—and the variety of takes is always refreshing. While I enjoy seeing the Edgar Award nominations each year, it seems to me they can’t really begin to cover the “best” in such a diverse field. Our six pages of “Fave Raves” is a step in the right direction!

Brian and I are really enjoying the new ABC TV series Stumptown. Based on Greg Rucka’s prickly Portland PI Dex Parios, it’s got a terrific cast, good writing, and a lot of energy. Kevin Burton Smith likes Stumptown, too, and has high hopes for its future.

A free promotion of a Nora Roberts book from the drugstore eventually led Erica Spindler to her criminous career. But it’s her art training that she credits for her very visual writing style. “After all, writing is just painting pictures with words,” says Spindler, who earned an MFA from the University of New Orleans. John Valeri talks to Spindler in this issue.

Our legal fiction expert, Jon L. Breen, gathers together his most recent selection of notable courtroom thrillers for your entertainment in this issue.

As he tells John Valeri, Phillip Margolin’s legal career was inspired by fiction: “I tore through Erle Stanley Gardner’s Perry Mason novels and the Ellery Queen mysteries,” he says. “By the seventh grade, I had decided that the only thing I wanted to do was try murder cases.” And, once he had successfully done that, Margolin circled around to writing legal thrillers himself!

Now in its 21st season, Midsomer Murders continues to enchant fans of British mystery TV. Pat H. Broeske talks to producers and writers, including Anthony Horowitz who helped create Midsomer Murders, about the cozy phenomenon. “I think particularly now, with so many difficulties surrounding politics and the media, people look back very nostalgically on an England that consisted of smaller, quieter communities where everyone knew everyone and life was simpler,” Horowitz says.

Also in this issue, we have interesting My Book essays contributed by Claudia Riess, Nancy Bilyeau, and Art Taylor.