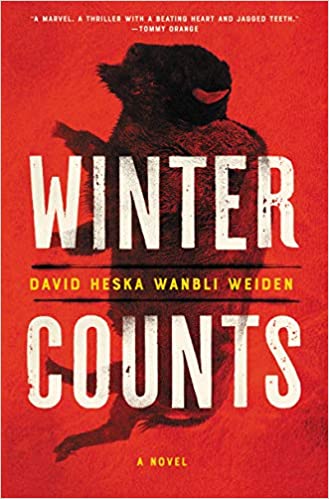 Winter Counts, by David Heska Wanbli Weiden, is a gritty and well-developed crime novel with an insider’s view of life on the Rosebud Indian Reservation in South Dakota.

Virgil Wounded Horse is a thug for hire. When justice fails—as it often does on the reservation, since “the feds prosecuted all felony crimes” and they ignored anything short of murder—Virgil will deliver a beating to the offending rapist, abuser, thief, or pedophile. His usual price is a hundred bucks for every broken bone and upended tooth. When a tribal leader hires Virgil to deal with a local man bringing heroin onto the reservation from Denver, Virgil thinks it is just another job with a higher than normal payday. But everything changes, and the job becomes more personal, when Virgil’s nephew overdoses on heroin.

Weiden is “an enrolled citizen of the Sicangu Lakota Nation” and the detailed setting, from the poverty and hopelessness to the impact of racism and federal disinterest, is rich with the real-world Lakota experience. The plotting is crisp and, with a single minor exception (an underdeveloped embezzlement scheme), believable.

The narrative is powerful and its native voice is both unique and welcome to the genre. Weiden, who won a 2020 Spur Award for his children’s book, Spotted Tail, is a writer to watch.