Books
Hour of the Witch 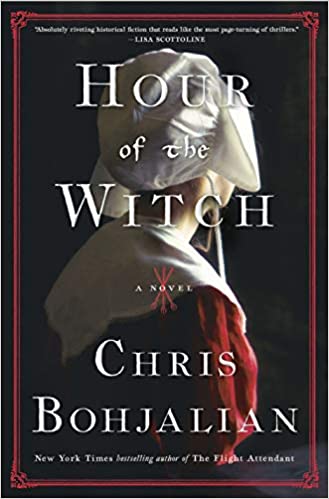 Set in Boston in 1662, Hour of the Witch vividly portrays the dangers of navigating Puritan society for a young woman who has the temerity to believe in her own self-worth.

At 24, Mary Deerfield is beautiful, intelligent, kind, and still childless after five years of marriage. Her husband Thomas is a drunkard nearly twice her age, a prominent man who demeans her and treats her cruelly.

An unexpected gift of a set of three-tined silver table forks, newly fashionable in Europe but viewed by many in the colonial church as “the Devil’s tines,” sets in motion a chain of events that forces Mary to fight for survival: her servant’s seriously ill brother, whom Mary tried to help with healing herbs, dies; she finds items that suggest witchcraft buried in her dooryard; and Thomas’s violence escalates dangerously.

Fearing her husband might kill her, Mary is determined to escape her marriage, but her headstrong character and boldness in calling out the hypocrisy of powerful men make her the target of evil rumors. A witch panic is spreading across New England and dangerous gossip swirls around unconventional women, especially those who defy “God’s natural order.”

Earlier the same year, four accused witches were hanged in nearby Hartford, Connecticut. And just like contemporary conspiracy theories, while “evidence” does prove someone is a witch, the lack of any evidence doesn’t prove they aren’t.

Mary’s story is absorbing, thought-provoking, and entertaining all at once. Details of everyday life in colonial society give the story an authentic feel, while many of the book’s themes still ring true in the modern world.

Although Mary herself feels empathy for outsiders, due to the realistic 17th-century setting, some characters have negative attitudes toward different religious beliefs, or refer to the indigenous peoples of Massachusetts in terms that are now rightly considered offensive.

Mary is a shrewd judge of character with a penchant for introspection, and her rich inner life is beautifully portrayed. The numerous supporting characters are well-drawn and believable, the dialogue vivid, and the writing crisp. The narrative offers one surprise twist after another until the dramatic, unexpected conclusion.