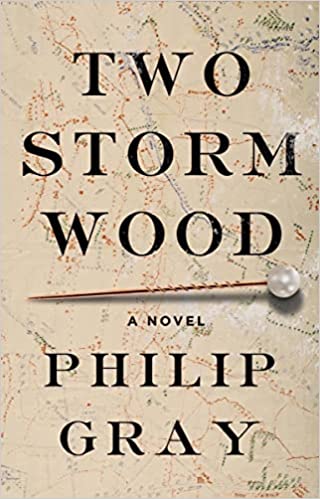 In Two Storm Wood, Philip Gray, who has published several thrillers and novels of historical suspense under other names, creates a moving love story hidden inside a harrowing and psychologically observant historical thriller.

In Oxford in the spring of 1916, Amy Vanneck, the sheltered only daughter of wealthy, well-connected, but stifling parents, chances to meet Edward Haslam, a gentle music teacher who grew up an orphan. Their clandestine, whirlwind romance will send them both down paths more difficult and dangerous than either could ever have imagined.

Amy’s snobby, conventional family deeply disapproves of Edward, and she hesitates to accept his marriage proposal for fear they will cut her off. Soon after, he enlists in the British Army (despite his nonviolent principles) and is sent to fight in the trenches, first in Belgium and then in France, serving under a heroic and charismatic commander who inspires almost fanatical loyalty from his troops. He writes often to Amy—until he is reported missing in action in August 1918.

After the war ends, she sets out to find him, unprepared for the unimaginable devastation of the battlefields where the British Army is still working to recover and identify the remains of tens of thousands of men. She is intrepid, determined, and resourceful, undaunted by harsh conditions, horrific situations, or the soldiers’ firm conviction that a lady just doesn’t belong there.

Knowing that Edward is almost certainly dead, she is steadfast in her search, refusing to look away even when she stumbles onto the scene of a brutal mass murder near where he was last seen. Was Edward a victim—or worse, somehow involved? But others, including a former Scotland Yard detective now serving in the military police, have their own hidden motives for investigating what happened— and some will stop at nothing, even kill again, to prevent the truth from coming to light.

The narrative flashes forward and back in time, juxtaposing the violence of trench warfare with its dreary aftermath. Vivid descriptions of destroyed towns, scarred veterans, the wasted landscape, and senseless brutality effectively convey the horrors of war and bring the setting to life. The characters, from laborers to senior officers, are complex, compelling, and relatable as they wrestle with fundamental moral questions. The suspense skyrockets as the various plot threads converge, putting Amy in heart-pounding danger, with a stunning final twist on the very last page.