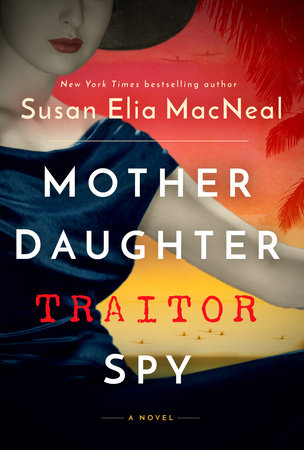 Graduating from Hunter College in the spring of 1940, blonde, blue-eyed Veronica Grace seems to have it all. Her award-winning student journalism has won her a coveted publishing job and it looks like the world is her oyster, despite the wars raging in Europe and Asia.

But when Veronica makes a mistake that costs her her big break, she and her mother, Violet, leave Brooklyn to make a fresh start in Santa Monica, California. With Veronica on the cusp of independence, her mother, Violet, realizes that she, too, is about to embark on a new phase of life. Vi is a German American, the widow of a naval officer, and a wiz at sewing and embroidery.

Unable to land a newspaper job as a young woman without experience, Veronica takes on a typing job. Meanwhile, Violet’s embroidery catches the eye of a wealthy woman, who hires her to embellish a blouse with edelweiss flowers. The two women quickly discover that their employer and new friends are Nazi sympathizers, but the police and FBI are only interested in pursuing communists.

Veronica and Vi turn to a Navy buddy of the late Commander Grace, who puts them in touch with the leaders of a private intelligence operation dedicated to stopping American Nazi propagandists and saboteurs. As attractive women with German roots, Veronica and Vi are uniquely qualified to infiltrate the Los Angeles Nazi groups, which revolve around the Bund, a German social club.

Intrepid and brave, they don’t hesitate to take on the assignment; but the more they learn, the more they realize how truly sinister the groups are. Constantly playing the role of enthusiastically endorsing what they truly abhor takes a heavy toll, especially for Veronica.

Though fictionalized, their story is based on real people and events; the author provides details about each character’s real-life counterpart, a list of sources, and a historical note at the end of the book. Veronica and Vi are wonderful characters, and the supporting characters are nuanced and well-drawn.

The danger escalates as the Nazis’ plot unfolds, while the risks the women take ratchet up the suspense. The theme of patriotism for a diverse, democratic United States versus patriotism for a white, Christian, authoritarian America is sadly still very relevant today. Susan Elia MacNeal’s novel is not just a terrific read, it illuminates an aspect of World War II history that deserves to be more widely known.