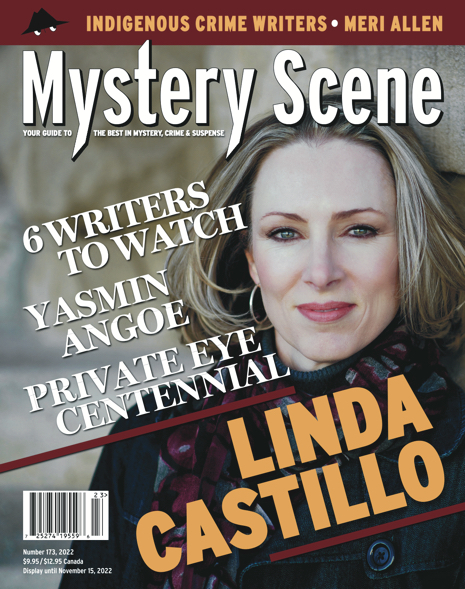 This issue marks a milestone of sorts for Brian and me. The 2002 Fall Issue was our first as publishers and owners of Mystery Scene.Two decades later here we are—happily bringing you news and notes from all over the world of crime, mystery, and suspense.

Speaking of anniversaries of note, it’s the 100th birthday of the hardboiled private eye. And according to our gumshoe expert Kevin Burton Smith, this past century of rock ’em, sock ’em entertainment is only a prelude to a new generation of PIs of all stripes and every persuasion. An iconic figure in a thriving genre—what’s not to celebrate?

It was a plainly dressed Amish man, driving a horse-drawn buggy on a winter’s day that sparked author Linda Castillo’s imagination in 2006. Since then she has written 14 bestselling novels about police chief Kate Burkholder set in the Ohio Amish community of Painter’s Mill. Oline Cogdill talks with Castillo in this issue.

Yasmin Angoe cites winning the Eleanor Taylor Bland Award from Sisters in Crime as one of the best moments in her life. “It came at a time when I thought I wouldn’t make it as a writer,” she says. “It helped give me validation that I hadn’t been lying to myself all these years, that people who didn’t know me believed in my story and in me.” Believe in her they did, and so did everyone else who read Angoe’s hard-charging Nena Knight debut, My Name Is Knight. John Valeri catches up with Angoe in this issue.

And once again we bring you one of my favorite annual features: “Writers to Watch” selected by Oline H. Cogdill. Some of these authors are breakouts, some have been around for decades—but all of them are currently making waves. Don’t miss this list of movers and shakers!

After years of seeing themselves depicted by white authors in novels, mysteries written by indigenous authors are increasingly bringing their own voices and perspectives to enrich and advance the genre. Craig Sisterson offers a survey of some of the best and brightest.

John B. Valeri gets the scoop on how a cozy mystery—say one written by Meri Allen—is like ice cream. Craig Sisterson catches up with Emma Viskic, an Australian musician- turned-novelist who created a sleuth who can’t hear the music she so loves.

We’re bidding a fond farewell to Jon L. Breen, our nonfiction review columnist, who has decided to retire after 20 years at Mystery Scene. Jon’s outstanding criticism has been a highlight for me from my first issue working on the magazine and I believe for our readers, as well. We wish Jon all the best and thank him for all his fine work.

Fans of reference works need not despair, however. Pat H. Broeske debuts her new column, “Just the Facts” in this issue. Coauthor of bestselling biographies of Howard Hughes and Elvis Presley, Pat is a former Hollywood journalist and producer of reality-based true crime TV. A Southern California native, she lives in Orange County where she teaches film analysis for a community college. She has also contributed a number of articles to the magazine. Welcome, Pat!

Also in this issue, we have entertaining My Book essays from Daniella Bernett, Claudia Riess, and Alicia Beckman.