Ethel Lina White, best known for her novel The Wheel Spins (1036) which was filmed in 1938 by Alfred Hitchcock as The Lady Vanishes, penned this line in The Third Eye (1937):

"She opened her cigarette case and began to pour out coffee with shaking hands." 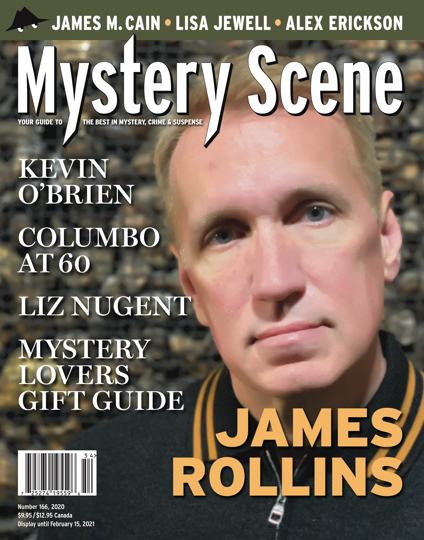 There is much of interest in Oline Cogdill’s profile of thriller writer James Rollins. He was a veterinarian, for instance, and started writing surrounded by barking and meowing patients. Then there’s his impressive list of bestsellers—particularly the Sigma Force novels about gun-toting scientists. But what really caught my eye was this: “He also subscribes to 24 magazines on topics such as research, history, and scuba diving...” Now there’s someone after a magazine publisher’s heart!

It’s been 60 years since the deceptively humble Lt. Columbo debuted on live TV and became an immediate hit. But you might not have recognized him—three other actors portrayed Columbo before Peter Falk took over the role and made it his own. Michael Mallory reveals all in his entertaining article.

“The dynamic between a man and a woman in a long-term marriage is fascinating to me. It’s rare to meet a couple who’ve accepted their share of the power cake, the battle is ongoing over decades in many cases,” Lisa Jewell says. John B. Valeri talks to Jewell about her latest novel, Invisible Girl, which looks at the delicate shifting balances of a relationship over time.

It’s time for the annual “Mystery Lovers’ Gift Guide” and our favorite little elf, Kevin Burton Smith, has been scurrying about finding treasures to melt the heart of even the grouchiest Grinch. And wait, haven’t you been very good this year, too?

You’ll find Alex Erickson on the cozier side of the crime fiction street—he revels in small-town Ohio life in his charming Bookstore Cafe mysteries featuring Krissy Hancock. “The pandemic won’t happen in this world,” Erickson says. “People need an escape from reality sometimes, and I don’t think it would help anything to have Krissy struggle with real-world problems when many of us want a chance to forget about such things for a while.” Amen to that!

A few years ago, the British Library launched its reprint series of classic crime novels from the Golden Age of Detection. The series, brought to the US by Poisoned Pen Press, was a huge hit. Now, the Library of Congress has mined the history of American detective fiction for its own crime classics line, again with the assistance of Poisoned Pen Press. Jon L. Breen takes a look at these handsome reprints, each carefully chosen to represent some strand of American crime fiction and offering introductions by mystery maven Les Klinger. Bravo!

Craig Sisterson has an interesting conversation with Irish novelist Liz Nugent in this issue. Nugent has always been fascinated by villains and as a child wanted to be the witch in school plays. “All those Disney kinds of princesses were just saps,” says Nugent. That little girl was on to something...

Like many writers in the 1940s, James M. Cain followed the siren call of Hollywood but his own screenwriting never amounted to much. Hollywood struck gold, however, when it put Cain’s novels on the screen. Double Indemnity, The Postman Always Rings Twice, Mildred Pierce—these films are still admired today. Pat H. Broeske gives us the lowdown on these movie highlights.

This year, Kevin O’Brien celebrates 23 years and 20 books—a milestone capped by his first ever continuation novel, The Bad Sister. John B. Valeri talks with O’Brien, who credits his publisher with essential support.

Also in this issue, we have interesting My Book essays contributed by M.E. Browning, Andrea J. Johnson, Maya Corrigan, and Becky Clark.

“It is surprising that Mr. Gould lived long as he did, in view of his character.”