'Tis the season for holiday reading—cozy, funny, and thrilling.
Mystery Scene asked authors of the season's best new holiday-themed reads to send presents down the chimney to their own creations in this first of a two-part special. 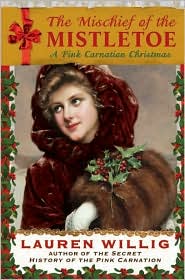 Reginald "Turnip" Fitzhugh is off to visit little sister Sally at boarding school for the holidays. As is oft the case for the young nobleman of the series, he's mistaken for the English spy The Pink Carnation—this time by Sally's lovely school governess Arabella Dempsey. What ensues is a little bit of espionage, a little bit of comedy, a little bit of a romance, and even a little bit of Jane Austen (who happens to be Arabella's best friend).

The Gift
"Since Arabella and Turnip were more than a little distracted during the holidays, they're exchanging belated gifts this year," says Lauren Willig. "Turnip has elected to bring Arabella breakfast in bed. The toast may be a bit burnt (after that fire in the kitchen, Cook's nerves will never be the same), but there's plenty of raspberry jam. Turnip did draw the line at milking the cow himself, though, on the grounds that they're 'deuced tetchy beasts, cows.' As for Arabella, knowing Turnip's penchant for gaudily embroidered floral-patterned waistcoats, she's elected to make him one. The theme? Mistletoe, of course! Happy holidays, all! May your gifts bring you as much joy as Arabella's and Turnip's bring them." 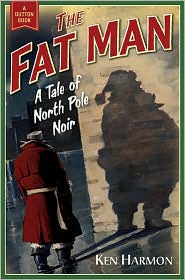 Gumdrop Coal, a disillusioned elf currently on the outs with Old Saint Nick (the “Fat Man” of the title, of course), finds himself relieved of all Christmas Coal Patrol duties and under suspicion in the mysterious death of a longtime Naughty List resident. With the aid of wisecracking girl-elf reporter Rosebud Jubilee from The Marshmallow World Gazette and his best friend Dingleberry Fizz, a slow-witted but good-natured elf, Gumdrop uncovers an evil conspiracy that threatens to wipe out both Santa Claus and Christmas for good.

The Gift
"I would give Gumdrop Coal a Chihuahua lamp," says Ken Harmon. "I saw one once, the base was a wooden Chihuahua with a brass pole coming out of his back. The shade was multicolored stripes that just said 'festive' in a south-of-the-border kind of way. I think this would be the perfect desk lamp for Gumdrop’s office, to cut through the noir gloom. It would also remind Gumdrop not to take himself too seriously, and I imagine that every time he would switch the lamp on or off by flicking the Chihuahua’s tail, the grumpy old elf would have to smile—and that’s a great way to start or end the day." 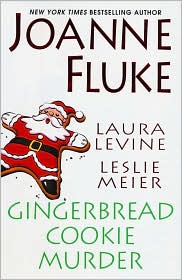 The Gift
"Acting as Hannah Swensen's genie, or fairy godmother, I'd love to give her a vacation for Christmas," says Joanne Fluke. "I'd whisk her away (without a whisk, or a wooden spoon, or even a mixing bowl) to a tropical paradise far away from the frozen wasteland of a Minnesota winter, plunk her down in a comfy chaise lounge on a white sandy beach, serve her fruity libations with cute little umbrellas in the glasses, and fan her with a palm frond to make sure her box of gourmet chocolate truffles doesn't melt. There wouldn't be a single murder victim for her to stumble over, no family crises for her to handle, and no distractions from the men she's been dating.... Second thought, never mind. She'd probably last about five minutes before she hopped a plane for home." 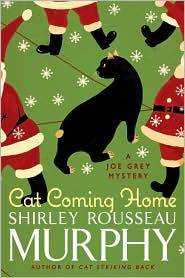 It's a sad Christmas indeed for newly orphaned Benny, who has just witnessed the murders of both his parents. Grandmother Maude whisks him away to her own childhood escape in Molena Point, California, for the holidays, but the town is restless from a series of violent break-ins, and a killer has followed Maude and Benny to their retreat. It falls to feline PI Joe Grey and his cat crew Dulcie and Kit, with some help from Misto, a wizened prison cat, to crack the case that will save an orphan and a stray.

The Gift
"My three cat detectives all look forward to Christmas," says Shirley Rosseau Murphy. "Joe Grey for the gourmet goodies, of course, while Dulcie and Kit throw themselves into the holiday spirit with wonder and great joy. I’d give Joe a tiny cellphone to wear, except a collar is, to him, as confining as a locked cage. In lieu of the phone, maybe a nine-course Christmas dinner served formally by his favorite humans all gathered to grant his least wish.

"I’d give Dulcie one amazing day of becoming a 'real human woman,' as she so often dreams, beautiful and clad in silk, wearing gold and emeralds: one day on the town shopping and dining and then the opera, all in grand human style before she returns to her four-legged tabby self and sets off to slaughter unheeding mice.

"And Kit? Oh, my. Kit has so many soaring dreams one couldn’t begin to know which to choose. Maybe her most powerful longing, just now, is for a handsome tomcat. Not a one-night-stand cat, mind, but her one true love for whom she’s been impatiently waiting. A strong, intelligent, personable tomcat to share her wildest adventures and her most impossible imaginings. Her longing might, or might not, be fulfilled in Cat Coming Home, but the spark is there, the hint of things to come. Maybe in the cats’ next adventure that very event might be forthcoming, a gift of love to share the rest of her long kitty life. Three magical gifts for three cats who trot just on the edge of magic—and with such amazements in mind, we wish you all a very Merry Christmas, feline and human, and a most joyous New Year."

Check back in December for Part Two of "Playing Claus."