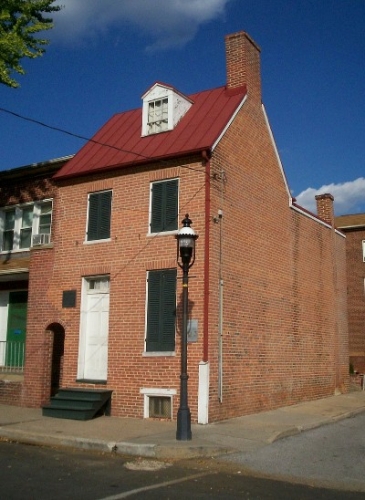 He's considered the father of American detective fiction. And now his home is in danger.
Because of a tight budget, the Edgar Allan Poe House in Baltimore is no longer receiving city funding to keep the historic landmark going. That amounts to about $80,000 a year to pay for the curator's salary, a security system, utilities and supplies.
Actually, the Poe House hasn't received any money from the city's general fund since last summer. It has been operating thanks to money that the curator, Jeff Jerome, has raised through the years. Now Baltimore is saying that the Poe House must be self-sustaining by 2012 or it will close.
Poe lived in the cramped three-room row house that's now in a dicey neighborhood with his aunt, cousins and grandmother from 1832-1835, before he became famous for his macabre tales. He never lived in Baltimore again, but he died in the city and and is buried in Baltimore. Poe houses also are in Philadelphia and New York, and other cities.

Landmarks such as the Edgar Allan Poe House and Museum in Baltimore are part of our history and should be preserved and open to visitors. While it cannot be torn down because of its historical designation, a vacant house is an open invitation to vandals.
These are tough economic times we live in and every city has had to make uncomfortable cutbacks.
Baltimore alone has had several historic venues such as the Peale Museum and the H.L. Mencken House either go close completely to visitors or open sporadically. Other cities also are shuttering libraries, museums, historical landmarks. Many members of DorothyL have been discussing the closing of the Poe House, showing how mystery readers are united.
There's a petition to sign to keep open the Poe House at http://www.thepetitionsite.com/1/save-the-poe-house-and-museum-in-baltimore/.
Currently, more than 2,400 people have signed it. Sign the petition but also send money if you can. If 80,000 peole sent in $2 or $3 each, that would be enough to keep it running for a couple of years.
Photo: The Baltimore Poe House and Museum
baltimore-poe-house-in-danger
1787