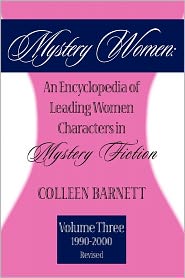 The author updates her exhaustive accounts of female detectives and important secondary characters introduced in the final decade of the 20th century through a cut-off date of December 31, 2008, adding about 200 pages to the previous edition, which was published in two physical volumes in 2003. Now 85, Barnett advises that she will not be adding a volume on new sleuths from the first decade of the 21st, so this is a good time to commend her on one of the most ambitious and thorough specialized reference projects in the annals of mystery fiction scholarship.

Arrangement is by character name with indexes by author and title. There is also a chronology of characters covered in all three volumes of the set and a secondary bibliography which includes not only sources on mystery fiction but also on political, economic, social, and general literary trends over the period 1860-2009. The extensive series histories and plot summaries have their value, but frank critical judgments add considerably to the interest. Usually these are neutral or laudatory but occasionally, as in the entries on Carole Nelson Douglas’ Irene Adler and Patricia Cornwell’s Kay Scarpetta, they can be harsh—or sometimes funny, as in the following on the Victorian housekeeper Mrs. Jeffries (Emily Brightwell): “A reader might ask: while the servants followed lovesick young nieces, frequented seedy taverns, or set séance traps, who was feeding the horses, polishing the silver and tending to the clothes? These employees would not last a week at the Bellamys of Eaton Place.” Barnett admits to the inevitable presence of errors in a project this ambitious. Kathy Lynn Emerson was the author, not the editor, of Murder and Other Confusions. Margaret Lawrence (who writes the Hannah Trevor series) and Martha C. Lawrence (who writes about Dr. Elizabeth Chase) are two different people, and it was Margaret Lawrence who also wrote as M.K. Lorens.

An update to one of the most ambitious and thorough specialized reference projects in mystery fiction, this latest edition adds 200 pages of research to the original 2003 double volume.