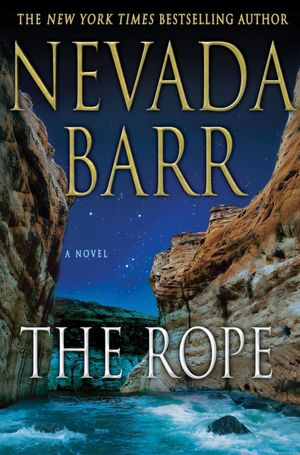 In this prequel to Barr's popular mystery series, Anna Pigeon is not the resourceful park ranger we've come to admire and love. Instead, she's a hard-drinking, self-pitying, screwed-up woman who's trying to run away from her problems rather than face them.

As The Rope opens, Anna awakens from a drugged stupor at the bottom of a 20-foot-deep "solution hole," a well-like depression common in the desert Southwest. She's naked, her shoulder is dislocated, the word WHORE has been carved into her thigh, and there's a murdered teenage girl decomposing in the hole with her. This horrific situation is just the beginning of an extraordinary thriller in which Anna, a temporary National Park Service worker at a Lake Powell marina, finds her true calling while attempting to escape from a demented killer.

To tell this story, Barr has wisely opted for multiple points of view, thus while Anna is fighting for her life at the bottom of that hole, we also experience the lives of other park workers. Compared to Anna's messed-up mind, even the most neurotic of them appears normal, until we realize one of them might be the teen's killer, and that he—or she—plans to finish the job on Anna.

The Rope is writing of the highest caliber, quite possibly Barr's best yet. It's a hero's journey about a seriously damaged woman who must make a conscious choice to live, even though death promises lasting peace. In her most despairing moments, Anna—who'd been a Manhattan theatre director before her husband's untimely death—actually quotes part of Hamlet's "To be or not to be" soliloquy, while tempted to let the desert sun take her. These theatrical allusions keep cropping up, providing a startling contrast between Anna's sophisticated, big city past and her current struggles against the desert's primitive elements. A warning: the sense of dread in this superb novel is almost unbearable, so if you read it at bedtime, prepare to wake up screaming.

In this prequel to Barr's popular series, a hard-drinking Anna Pigeon is on the run from her problems.