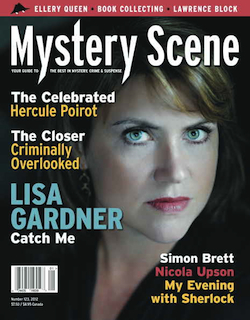 Intensive research underpins each of Gardner’s first-rate thrillers, including her latest, Catch Me.
by Oline H. Cogdill

Stymied in her research for a biography, Upson instead deployed enigmatic Golden Age writer Tey as the detective in a mystery series.
by Lynn Kaczmarek

Simon Brett and The Modern Whodunit

Brett’s career is a showcase of the classic, pure whodunit.
by Jon L. Breen

This criminally underappreciated police procedural is questioning the moral assumptions of an entire TV genre.
by June Thomas

Value can skyrocket when a book has a story above and beyond what’s contained in its pages.
by Nate Pedersen

My Evening with Sherlock

A clever researcher has revealed the author of the oldest known Sherlock Holmes pastiche as none other than Peter Pan’s creator.
by J.M. Barrie

How critiquing bad books made for a good education. Plus, the true story of the worst story ever.
by Lawrence Block

Kiss Me, Kill Me Mystery Crossword

The Expats
by Chris Pavone

A Toast to Robert Mitchum
by Dick Lochte