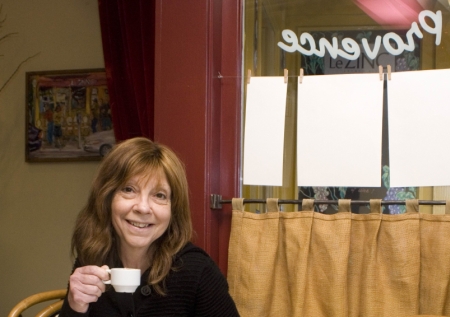 It’s also possible, somewhat in the style of Aimée Leduc, to trace the beginnings of Cara Black’s Paris-oriented career to events in the youth of a girl born in Chicago and raised in Northern California.

When Cara Black was growing up in the Bay Area, her father, a sales manager (“He could sell anything,” his daughter says) was an avid Francophile: “He’d make us watch that Jacques Tati film [Monsieur Hulot’s Holiday] countless times,” she remembers. Later, Black’s father joined with friends to found a winery. As a teen, Cara attended a Catholic school where nuns spoke and taught archaic French. And Cara had an uncle who’d studied art in Paris under the GI Bill with Georges Braque (until, according to family lore, he had the temerity to ask that great painter to turn up the heat in his frigid studio).

“My parents weren’t stereotypical, at least my dad wasn’t,” Cara Black says. “I always felt there was a bigger world than where we lived in a California suburb. And maybe that kind of opened my eyes.”

The culturally aware Cara grew up a constant reader, with Charlotte Brontë and Oscar Wilde among her favorite authors. At 16, she fell in love with Promise at Dawn, a book by contemporary French novelist Romain Gary, and wrote its author a fan letter which his American publisher forwarded. Gary sent back a thank-you note which included his Paris address: 108 Rue du Bac. 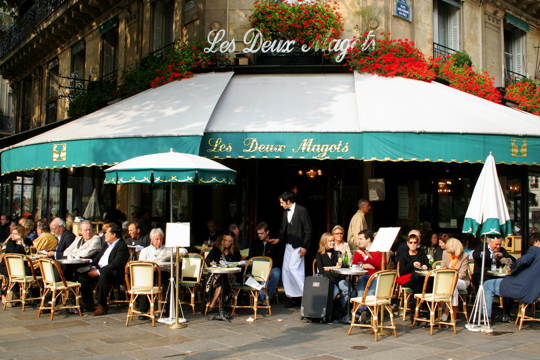 Meanwhile, Cara’s father, who had read a lot of F. Scott Fitzgerald (a one-time Paris resident), had become a fan of detective fiction, especially the works of Dick Francis and P.D. James. “You ought to try one,” he told his daughter. But Cara had other interests.

She was 19 the first time she went to Paris, she says: “We slept under the bridge, you know; it was the days when you were hitchhiking around … I went to 108 Rue du Bac, Monsieur Gary’s address, and went inside the building. It was just incredible—these stairs that went up, this red carpet, the stained-glass window. Here I am in jeans, and I knock on the door and there he was: very handsome man, very charismatic…this black hair…blue-turquoise eyes, and he looked at me and he said, ‘Do I know you?’”

The novelist took his young visitor to the corner café, where he ordered for her what he ordered himself. “So I had my first cigar, and my first espresso with Romain Gary!” Black recalls. “And I’m thinking, ‘Oh, this is what it’s like to be a writer in Paris….’”

She started keeping a journal—but lost it. “I was too much into living,” she says now. “I always thinking, ‘Some day I’m going to write this down,’ and—nothing.”

Done with world wandering, Cara returned to Northern California, graduated from San Francisco State, became a preschool teacher, married a bookseller—then returned to Paris in 1984 to visit an old friend. 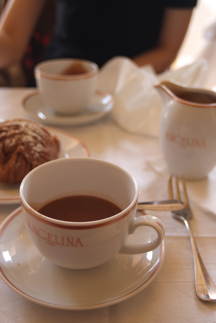 The woman took Cara to the Marais district, where sagging, soot-stained 17th-century buildings surrounded them. “We walked into this narrow street,” Black says, “and it opened up—and we were in the Place des Vosges…this arcaded 17th-century square. There was grass, and fountains gurgling, and pitted stone—and I felt, in this strange way, that I was back home.”

Her friend wanted to show her something else: They walked to a street where the signs were in Hebrew and Yiddish. “She pointed to an apartment upstairs and said, ‘That’s where my mother lived during the German occupation, during World War II. She was Jewish, and she was 14, and one day, 1943, she came home from school and her apartment was empty; none of her family was there.’”

The building’s concierge said she didn’t know where the girl’s parents and siblings had gone, but she fed and helped the girl, who lived there alone for the last year of the war—after which she learned her family had died in Auschwitz.

“I heard this story,” says Black, who isn’t Jewish, “and I thought, ‘Fourteen years old! What would that be like?’ I never really forgot that.”

Another decade passed. Cara and her husband became parents of a son. The Blacks returned to France for a month in Provence. The country was changing. Its past was catching up with its present; old sins from the war period were being acknowledged.

On the eve of their return to San Francisco, Cara and family stayed in Paris for one night—in the Marais. “I was back in that Place des Vosges,” she says, “and this time the moonlight was hitting the stone, and that whole story came back to me. And I thought...what if I had lived during that time? What if I had a young son? What if I had to put food on his table? Just what would it be like?” 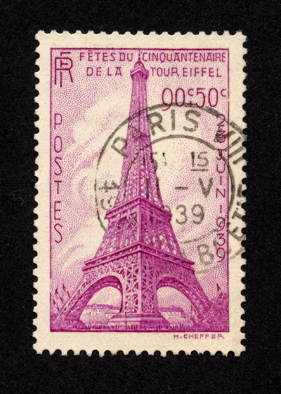 Cara’s past was catching up to her too: After all these years, she wanted to create—to tell this story that moved her. But how? She’d never made good on her vow to write fiction and at this late date didn’t think she could. And yet—

“I’d started reading mystery novels,” she says. “I was reading a lot of P.D. James. And I thought, ‘Well, her books are novels; sure, there’s crime, and murder—but there’s also psychological depth, and social comment.’”

Back home in the Bay Area, she attended mystery writing conferences at Book Passage, an independent bookstore in Corte Madera, where professionals including Judy Greber (aka Jillian Roberts), Marilyn Wallace, and Carolyn Wheat encouraged her fledgling efforts. “People offered really constructive criticism,” she says. “You know, I was a young mother; but when I was away for these four days, I was—a writer. I could talk [about] my ideas and was taken for real, do you know what I’m saying? It wasn’t just a dream.”

But there was much to learn: how to shape dialogue, set a scene, maintain tone. Cara joined a Berkeley writing group and worked three and a half years on her book, which featured a young, half-French, computer-savvy investigator named Aimée in the early 1990s: the time when Cara herself began revisiting and researching Paris.

Some people in that city were willing to speak with her, she says, and some would not. “I got the whole gamut,” Cara remembers, “...because I wasn’t published, I had no credentials. It’s really taken a long time to form connections, but you know in France it’s about who you know, and whose brother’s uncle’s son-in-law knew this thing. And a lot of it [involves] introductions: they’re very traditional. But I persisted. At that time, before we had email, I had to write letters—in this archaic French—to meet people and set up appointments.”

Her persistence paid off. In ensuing trips (Black now visits Paris twice a year), she’s made and maintained many French contacts, from people in the upper reaches of government to folks who love to explore underground sewers. During her most recent stay, she says, “I got to visit the crime-scene unit at the Quai des Orfèvres: you know, where [Georges Simenon’s fictional] Inspector Maigret had his office? That was fascinating; I spent four hours there. And that was again through a connection of a connection; and it took six months. But they were very nice and really helpful.” 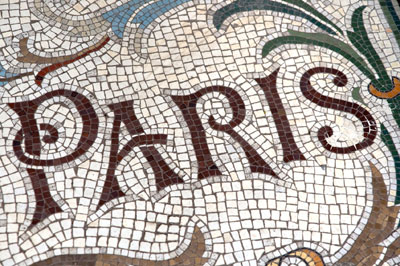 Back in 1999, without benefit of agent, Cara Black sold her book Murder in the Marais to Soho Press, a firm specializing in mystery fiction set in foreign countries.

She’d fulfilled her youthful promise to write a book; now she thought her work was done. But her Soho editor surprised her: “[She] said, ‘Well, where’s Aimée going next?’ I said, ‘What?’ ‘Yeah, where’s the next book gonna be set?’”

“How about Belleville?” the new author blurted, naming the Parisian district where she’d often stayed at a friend’s apartment.

So, this time in much less than three and a half years, Murder in Belleville was written and published—and after that, eight more Aimée Leduc mysteries, each set in a different one of Paris’s 20 arrondissements, all taking place in the 1990s. The just-published Murder in the Palais Royal has Aimée dealing with criminal acts stemming from old events in Murder in the Marais.

Cara’s found no shortage of crimes for Aimée to investigate in those turbulent ’90s. “I was really intrigued by how France was changing,” she remembers of that period. “Joining the EU, and these secrets coming up after the war. [The President of France, Jacques] Chirac gave the speech in ’95, where he actually apologized and admitted France had maybe done some things wrong during the Occupation. So a lot of things were hidden, but they were starting to come out. I was hearing lots of stories. 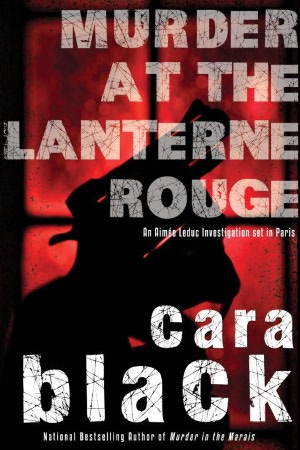 "I had met this man who was in the Ministry of Interior, a man who’s wracked by guilt, and he started talking to me and telling me about what he had to do for his job—which was to kick out illegal immigrants who were on a hunger strike in a church. He himself had been born in a displaced-persons camp after the war; he was a brilliant guy, but very messed-up psychologically. I started thinking about telling his story, of what he was going through, which I [eventually] fictionalized.”

In learning about such people and events, Black found that her original passion for storytelling somehow “just kept going.” But she isn’t sure when or even whether she’ll bring her heroine into the 21st century, with its more advanced technologies and post-9/11 concerns. “I don’t know; I’m really thinking about what I’m going to do.”

But one gets the sense that so long as Cara and Aimée attend to the past, their future will take care of itself.