"At gambling, the deadly sin is to mistake bad play for bad luck."

Law of the West: an Interview With C. J. Box
Hank Wagner 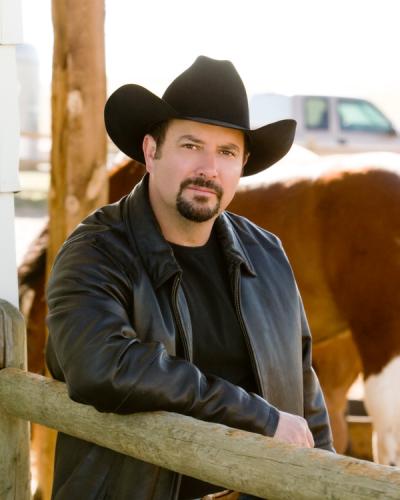 Mystery Scene sat down to talk about the bestselling series featuring the Wyoming game warden in MS #100, Summer 2007.

Looking at C.J. Box’s resume, which includes stints as a ranch hand, surveyor, fishing guide, and small town newspaper reporter and editor in his home state of Wyoming, it’s safe to assume that he’s quite familiar with “the Cowboy State.” Reading his mystery novels, all of which have been set in today’s West, one has to upgrade the word “familiar” to “intimate.”

Box has explored even the remotest parts of the state, indulging his passions for hunting, fishing, hiking, riding and skiing. His novels feature Wyoming Game Warden Joe Pickett, a flawed hero with a talent for stirring up trouble; Box’s familiarity with the terrain and the local population allows him to explore issues unique to that part of the country.

Box began writing his first novel with the intention of delivering a serious story about endangered species, but the book evolved into an entertaining mystery novel that also took a close look at environmental issues affecting the American West. The author has stuck to that basic outline ever since, delivering satisfying thrillers that also educate, if only indirectly. 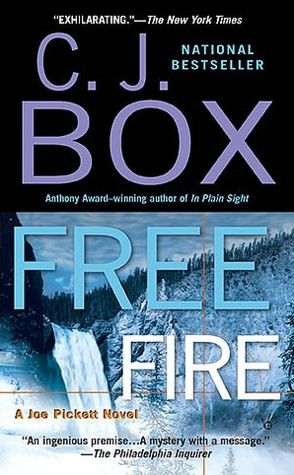 Box’s latest effort, Free Fire, is a case in point. It’s also a fascinating example of how an author takes a raw idea and turns it into a full-blown novel. The inspiration for the book came from a Georgetown Law Review article by Michigan State law professor Brian C. Kalt. “The Perfect Crime” posited the intriguing notion that one could literally get away with murder inside Yellowstone National Park. To summarize the theory: Although Yellowstone Park is comprised of land in Wyoming, Montana and Idaho, the entire Park is in the judicial district of Wyoming. The Sixth Amendment requires that a jury come from “the State and district wherein the crime shall have been committed...” So anyone committing a crime in the Idaho portion of Yellowstone must be tried by a jury from the state of Idaho but the district of Wyoming—essentially from the area of the park in which the crime was committed. However, no one lives in the Idaho portion of Yellowstone—therefore no jury can be assembled and no trial can take place.

Professor Kalt’s theory, picked up on by media outlets such as the BBC and NPR, was brought to author Box’s attention by helpful readers and friends. He was immediately struck by the possibilities.

“I’d always wanted to write a Yellowstone book, and the “perfect crime” theory was my entrée. I contacted Professor Kalt, then ran the theory by a US District Court judge to make sure it was valid. It was. And is. US Senator Mike Enzi (Wyoming) is taking action to try and close the loophole. I hope he’s able to do it.”

The desire to write about Yellowstone Park had its origins in Box’s extensive knowledge and deep affection for the place: “Although I’ve lost count, I know I’ve been to Yellowstone Park over 50 times in my life. When I used to work for the State of Wyoming in tourism promotion, I guided travel agents, tour operators, and journalists there in all seasons. When we (Box and Laurie, his wife of 23 three years) started our international tourism/marketing firm, the ‘hostings’ continued and I finally started getting off the beaten path. I’ve now hiked and fished in very remote parts of the park and have gotten to know both park rangers and employees who have a special bond with this unique place. I’ve always wanted to write about the world’s first national park from the inside out—the places most tourists don’t ever see.

When I came up with the idea for the book I interviewed dozens of experts and employees to get a real feel for the day-to-day struggles, challenges, and thrills of living in the park.” 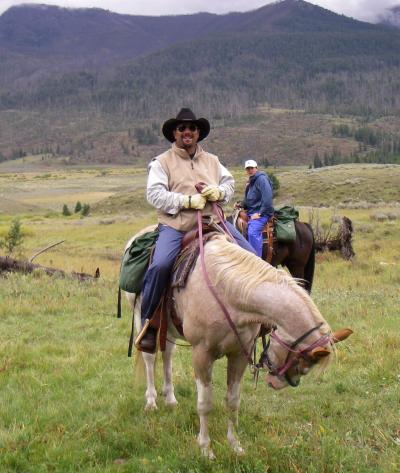 In the Fall of 2007, C.J. Box packed deep into Yellowstone on his trusty steed Strawberry.

The research certainly shows. Among other things, readers learn that Yellowstone Park site actually harbors a massive dormant volcano which is long overdue to erupt. “I think I first learned about that 20 years ago. Now it’s becoming common knowledge. In fact, the official park map has a dotted line signifying the Yellowstone Park caldera, which is most of the park’s interior. There is little doubt that someday it will blow. It’s a cause for great concern, considering that some believe that such an eruption could trigger another Ice Age.”

Another little known scientific fact Box reveals is that there are organisms in the park that have caught the attention of researchers around the world, although the uses Box posits in Free Fire are purely speculative. “There are organisms unique to Yellowstone that are be- ing ‘mined’ by scientists and commercial interests, which flies in the face of the purpose of a national park. On the other hand, maybe they’ll discover a cure for cancer.”

When Box decided to explore Yellowstone Park in fiction, his point man was naturally Wyoming Game Warden Joe Pickett. Free Fire begins with the murder of four campers in Yellowstone Park. When the killer, local attorney Clay McCann, walks away scot-free because of the aforementioned loophole in the law, Wyoming Governor Spencer Rulon decides he needs to institute his own investigation into the matter. Rulon approaches the currently unemployed Joe Pickett (readers can check out Box’s previous novel Out of Sight for the details on that) with a simple proposal: he will reinstate Pickett if he agrees to look into things at Yellowstone. Depressed since losing his job, Pickett readily agrees.

Pickett throws himself headlong into the investigation, persevering despite the lack of cooperation from park residents and local law enforcement. Digging into the details, Pickett comes to realize that the campers’ death was meant to hide a conspiracy to exploit natural resources unique to Yellowstone; he also realizes that the desperate conspirators will not hesitate to add to the body count in order to conceal their perfidy.

When Joe Pickett first appeared in 2001’s Open Season, his creator had no inkling of what was to come. 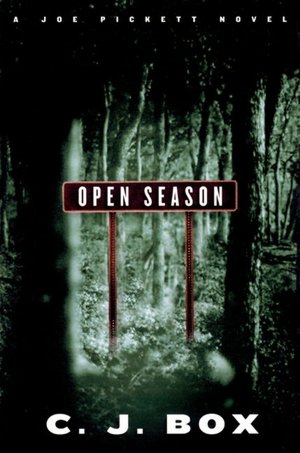 “I wrote Open Season as a standalone first novel with no real intention of starting a series. To me, it was a novel about the Endangered Species Act featuring a game warden.”

Readers, however, immediately warmed to Joe Pickett. The game warden operates his district out of Saddlestring, Wyoming, a fictional town in the Bighorn Mountains based loosely on Sheridan and Buffalo. Pickett is at heart a simple “everyman,” a hero that readers can respect and relate to. The conflicts Pickett faces on his job provide the meat and gristle for Box’s hard-hitting novels; the challenges he faces in his personal life give him a grounding and depth unusual in mystery fiction: “One of my favorite parts of writing is depicting the interaction of Joe and his family. As readers have noted, Joe’s daughters have aged in real time, which means new challenges and changes with each book.

Sometimes, I think Sheridan (Joe Pickett’s oldest daughter) is the most intriguing character in the novels. Since I have three daughters of my own—twins Molly and Becky (20), and Roxanne (16)—I do have some experience and knowledge in that area and my daughters aren’t shy about telling me if I got something wrong. I like to think the dynamics of the family make the novels more realistic and provide an enhanced emotional buy-in for the reader.”

The Pickett character has proven a surprising boon to Box. The bestselling series in which he’s featured has netted Box a slew of nominations (for the Edgar and Los Angeles Times Book Awards) and awards, (he’s won the Anthony, the Gumshoe, the Barry, France’s Prix Calibre 38, and the Macavity). Seven books into the series, which focus heavily on issues unique to the modern west and, more specifically, Wyoming—Savage Run, for instance, features a clash between environmentalists and corporate interests—Box is still excited to be writing about Joe Pickett.

“I’ve always got about five ideas ahead of me. Which one I’m going to go with depends on the logical arc of the storyline. The tough thing is to keep the characters and the series fresh. I hope I’ve done this by moving Joe around and giving him a new job and circumstances. That makes it more challenging for me and, I hope, more realistic. But there’s always a willing suspension of belief necessary in our genre that both the writer and the reader must agree upon.” 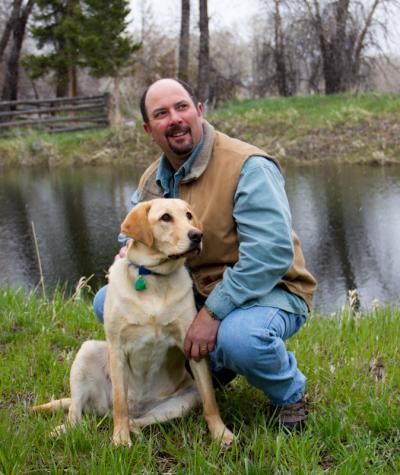 Although Box isn’t done with Pickett just yet, he still finds time to pursue other projects. For instance, there’s his short fiction, an example of which, “Pirates of Yellowstone,” appears in the prestigious The Best American Mystery Stories 2006. Readers can also expect a non-Pickett book next year. “Blue Heaven will be out in January of 2008,” said Box. “It’s a standalone thriller set in North Idaho—60 hours told in real-time from six different points of view.

Critically, C.J. Box has been compared to, among others, Zane Grey and Louis L’Amour. Asked on how he sees himself, as a genre writer or merely as a writer, Box says, “A novelist of the contemporary west, although that sounds more pretentious than I want it to.”

"I'm never going to take you to a party again, Susan,"Alex Tabor said,"if you're going to go around killing the guests."

MysteryScene RT @craigsisterson: Looking forward to this! There've been some great 'Best of the Year' lists flying about lately, but I don't think there…
21h • reply • retweet • favorite