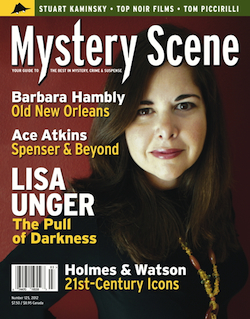 The Dark Imagination of Lisa Unger

A local tragedy sparked this writer’s fascination with crime and its effects.
by Oline H. Cogdill

The BBC’s contemporary take on Holmes is a deserved smash hit.
by Bill Hirschman

Back to Beer: Ace Atkins Does Spenser Proud

Atkins steps into some very big shoes and takes off running.
by Kevin Burton Smith

A Free Man of Color: The Benjamin January Mysteries

An annotated list for your viewing pleasure this summer.
by Ed Gorman

His new series debut takes a bleak look at a family of criminals on the eve of one son’s execution.
by Hank Wagner

Stuart Kaminsky’s battered ’tec is the go-to gumshoe for a cavalcade of stars.
by Michael Mallory

Fishing for a Mystery
by Beth Groundwater