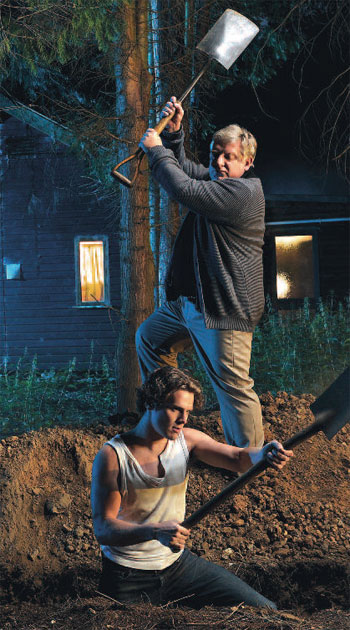 Acknowledged Crime Classics That Will Not Die

Deathtrap was staged in London’s West End in the 2010-2011 season and starred Simon Russell Beale (left) and Jonathan Groff.

SHERLOCK HOLMES (1899) William Gillette wrote himself the role of his lifetime in a play that he revived and toured for years. It’s a combination of plots and characters from the Sherlockian canon turned into an unabashed melodrama. Surprisingly, it holds up quite well if performed with zest and tongue in cheek as it was when Frank Langella starred in a 1977 version at Williamstown Theater Festival. Langella later filmed the production for HBO in 1981.

NIGHT MUST FALL (1935) Psychopathic serial killers were so little known when Emlyn Williams wrote himself the lead in this play that it both horrified and fascinated audiences. The plot centers on a hotel bellboy who kills an old lady and threatens the young woman who suspects him.

ANGEL STREET (1938 in England and 1941 in US) One of the first psychological thrillers, and so well executed that it ran for years. Patrick Hamilton’s play starred Vincent Price as the cunningly sadistic husband driving Judith Evelyn insane while mild-mannered detective Leo G. Carroll tries to stop him. In 1944, it became a film called Gaslight with Charles Boyer and Ingrid Bergman.

DETECTIVE STORY (1949) Sidney Kingsley’s plays melded social issues and kitchen sink realism such as medicine in Men in White and slum poverty in Dead End. Here he created the pressure cooker environment of a police station, resulting in what Joseph Goodrich calls the forerunner of Hill Street Blues.

THE MOUSETRAP (1952) Agatha Christie’s classic—going nonstop since November 25, 1952, in London’s West End—is the longest continuously running play in history. Its cast nightly begs the audience not to reveal the twist ending. Adapted by Christie from her 1947 radio play, which was written as an 80th birthday present for Queen Mary.

DIAL M FOR MURDER (1952) Originally written for the BBC, Frederick Knott’s thriller became a theater hit in London and New York. The plot depicts an urbane husband cold-bloodedly commissioning the murder of his wife and then squirming when the killing goes awry and the investigation closes in on him. It features one of the most complex bits of clue-and-solution in mystery theater. Does anyone understand the key-under-the-mat clue the first four times you hear it?

WITNESS FOR THE PROSECUTION (1953) Most people know this Agatha Christie masterpiece through Billy Wilder’s 1957 film, but it originally appeared in 1925 as a short story and later as a play, both slightly different from the movie. It functions as a mystery, a suspenser, and a courtroom drama about a young man accused of murdering an old woman who made him her heir. It’s notable for its central character: a wily, irascible old barrister.

WAIT UNTIL DARK (1966) A crime thriller, also by Frederick Knott, about a beautiful young blind woman being menaced by three hoods seeking drugs that her husband smuggled into the country. It includes one heart-stopping moment that works even when you know it’s coming. 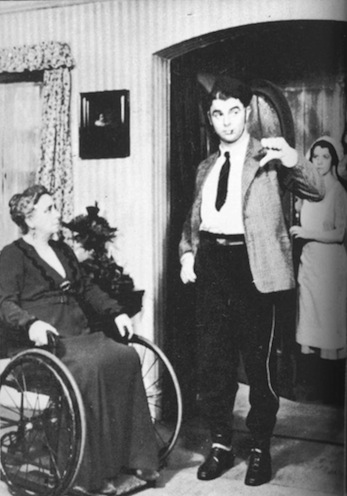 Don’t look in that hatbox! Night Must Fall by Emlyn Williams concerned a serial killer who liked to keep his latest victim nearby. Shown are May Whitty, Emlyn Williams, and Betty Jardine in the 1936 Broadway production.

SLEUTH (1970) This brilliantly pieced together tale by Anthony Shaffer punctures holes in the tradition of the stuffy amateur detective in the drawing room. It features three stretches of ever-ratcheting suspense, a major plot twist that is still fascinating the second time around, and a breathtaking finale. Trivia: Shaffer, who wrote two more minor thrillers, wrote the screenplays for Hitchcock’s Frenzy as well as three of the big-screen Poirot films.

DEATHTRAP (1978) Arguably this is the last great straight play chronologically in the entire genre to be a major hit on Broadway. It was one of the last stage successes for Ira Levin, who also wrote diverse novels and comedies ranging from Rosemary’s Baby to No Time for Sergeants. The meta-plot about the intricate machinations of a crime playwright in a slump and his ambitious protégé was alternately hilarious and breathtakingly suspenseful. It set the record as the longest-running comedy-thriller on Broadway and won Levin his second Edgar award. (The first was for his novel A Kiss Before Dying.)

THE MYSTERY OF EDWIN DROOD (1985) Rupert Holmes took Tony Awards and an Edgar for creating this musical adaptation of Charles Dickens’ unfinished novel—and provided multiple endings to be chosen by the audience each night.

Our interviewees suggested a few of their own favorites that the casual theatergoer might not have seen or read.

LAURA (1946) Vera Caspary turned her novel into a play script first with George Sklar but was never able to get it produced until after the film’s success. Mark Bellamy of Calgary’s Vertigo Theater says, “It’s really marvelous. It actually captures the feeling of film noir.”

COLUMBO (PRESCRIPTION: MURDER) (1962) Richard Levinson and William Link derived this stage script from their short story and a standalone episode for a television anthology show. The play, in turn, became the source for the pilot for the television series. The play closed in tryouts out of town with the death of its lead actor, Thomas Mitchell (who played the father in Gone With the Wind.)

I’LL BE BACK BEFORE MIDNIGHT (1979) Perhaps the most frequently produced Canadian play, Peter Colley’s comedic mystery-thriller has played from Rome to Kansas City, Italy to New Zealand. Bellamy outlines the plot: “Jan, who’s recovering from a nervous disorder, and her husband rent a remote cabin from an odd farmer who tells gruesome ghost tales. When the husband’s lustful sister arrives, frightening events transpire. What happens to the fragile wife as bodies appear and disappear gives this classic thriller its horrifying impact.”