"If you convey to a woman that something ought to be done, there is always a dreadful danger that she will suddenly do it." 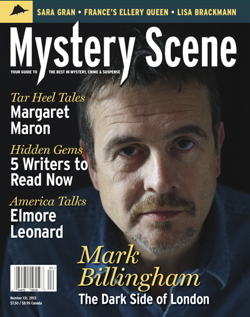 A good sense of humor, strong empathy for victims, and some righteous country music keep the ever-evolving Inspector Tom Thorne at the top of his game. .
by Oline Cogdill

Boileau-Narcejac: The Ellery Queen of France

The future of the private-eye novel looks bright with terrific new writers like these.
by Kevin Burton Smith

Hidden Gems: 5 Writers You Should Be Reading

You may not know their names—but you should.
by Tom Nolan

His influence as a great American stylist extended far beyond the boundaries of crime writing.
by Laura Miller

The Ambitious Card
by John Gaspard

"Nick at Nite: The cultural equivalent of aerosol cheese."