Dell Map Back Mysteries: They Don't Make 'Em Like That Anymore!
Gary Lovisi

The Dell Map Backs of the 1940s and 1950s were something special. It wasn't only their content as excellent as that often was; they were, quite simply, beautiful books. 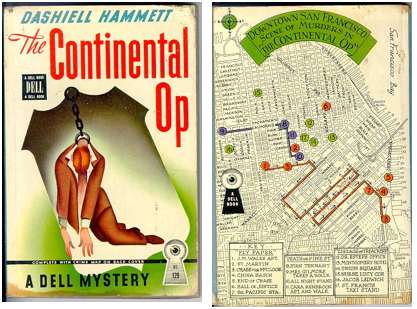 No publisher put more effort into producing fine paperbacks books than Dell. The sturdy laminated covers of the early books showcased illustrations by fine artists such as Gerald Gregg. Later books in the series featured covers by artists such as Bill George and Robert Stanley. Inside, editorial flourishes such as the inclusion of a "Cast of Characters" signified quality publishing. But of course it was the detailed, beautifully rendered scene-of-the-crime representations on the back of these books that made the Dell Map Backs so popular at the time—and so collectible now.

Beginning with Dell Book #5 in 1943, a mystery novel titled Four Frightened Women by George Harmon Coxe, a thin band on the cover proclaimed to the reader "with crime map on back cover." Back cover maps would appear on an amazing 577 volumes from 1943 until 1952. Dell issued a wide array of Map Backs in all genres, but mysteries made up 50% of their list and these are the books that are of special interest to us. They comprise a beautiful series of books and hold a special place in the hearts of mystery readers and fans, yesterday and today. 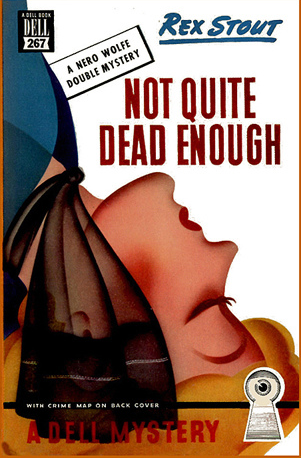 Dell editor Lloyd Smith, born in 1902, came up with the idea for the back cover maps (or someone at Western Publishing suggested the idea to him). Smith was, in essence, a one-man publishing whirlwind. According to most accounts, he designed and envisioned the series, originating the maps, casts of characters and other features, and even suggested the airbrushed covers that Gerald Gregg and others would paint so effectively.

Many of the maps were drawn by Chicago graphic artist Ruth Belew, who created at least 150 of the 577 maps. They showed anything from a nation or state with cities, streets, mountains, seas and lakes, to a Manhattan brownstone with diagrams of the various floors, or a country estate, showing rooms, gardens and outbuildings.

Many popular authors had their books reprinted as Dell Map Backs. Rex Stout and his famous Nero Wolfe stories appeared beginning with Dell Book #9 in 1943. In all, there would be a dozen Rex Stout Map Backs, each offering a unique look at his classic stories and characters. Other popular writers who had books in the series include David Dodge with It Ain't Hay (#27), a crime and drug novel. Its cover illustration depicts Death rowing a boat that carries a giant marijuana cigarette. On the back is a map of San Francisco "where marijuana and murder make a thrilling story." 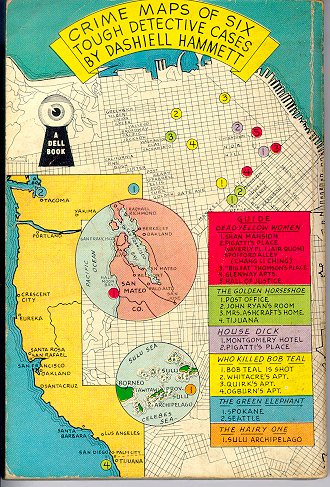 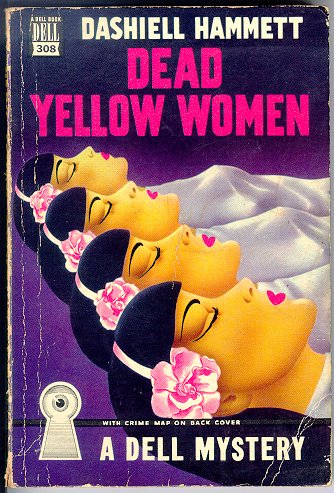 The classic tough guy writer Dashiell Hammett had seven Map Backs. The earlier books featured airbrushed covers by Gerald Gregg and later books offered action-oriented and sexy girl cover art by Robert Stanley. While the Hammett covers very greatly in design and content, all are interesting. The maps on the back of these for the most part show the Continental Op's stomping ground in San Francisco. Various maps of 'Frisco appear on the back of at least 5 books: The Continental Op (#129) with a hanging man cover; The Return of The Continental Op (#154) with gun and badge on the cover; Dead Yellow Women (#308) with four dead Asian girls on a morgue slab; Blood Money (#486, reprints Dell #53) with a man pulling a dead woman from the water; and The Creeping Siamese(#538) with cover art showing a sexy girl holding a bloody dagger. Each shows various well-designed maps of the streets of the city where the stories take place.

Some later Dell Map Backs were reprints with new cover art of earlier titles in the Dell series.Hammett's A Man Called Spade (#411, reprints Dell #90) has a cover portrait of private dick Sam Spade by artist Robert Stanley. On the back is a map of the apartment of Max Bliss, the scene of a murder in the title story of this crime collection.

Some of the Map Backs did not have illustrated covers at all but used photos from the film adaptations of the works. Examples of these early movie tie-ins include Night And The City by Gerald Kersh (#374) and Death In A Doll's House by Hannah Lees and Lawrence Bachman (#356). The former cover shows actors Richard Widmark and Gene Tierney, and the later book—filmed under the title Shadow on the Wall—shows the stars of that film, Ann Southern and Zachary Scott.

George Harmon Coxe was a popular pulp and hardcover author in the 1930s and 40s and his Four Frightened Women (#5) was the first Dell Map Back from 1943. He also had many more in the series. Examples include his Kent Murdock novel Murder With Pictures (#101) showing a bold blue map of the apartment where murder takes place and the Flash Casey novel, Murder For Two (#276) with a surreal cover of a giant pencil marking out two dead women. Then there's Murder in Havana (#423), a later novel with a women in bondage cover by Robert Stanley and a back cover map showing Cuba and scenes from the novel.

Brett Halliday was another author who did well for years with Dell Books chronicling the hardboiled adventures of his tough Miami private eye, Mike Shayne. One such example is the dead girl in the water cover for Blood on Biscayne Bay (#268), with a map of Miami Beach and Biscayne Bay where the murder occurred. 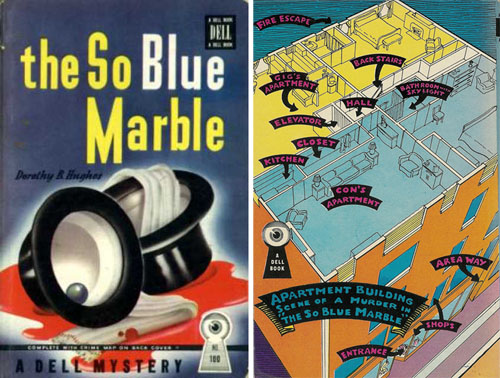 Traditional mysteries held center stage in the Dell Map Back series. Agatha Christie's first Dell Book, and her first Map Back, was The Tuesday Club Murders (#8) from 1943. Many more of her fine books appeared over the years, including Appointment with Death (#105) with a stylish airbrushed cover by Gerald Gregg, featuring the Grim Reaper and a map showing the Holy Land with an insert scene of ancient Petra. The Mysterious Mr. Quin (#570) shows colorful harlequins on the cover while the back has scenes from Canada, France, and other story locations.

Other traditional mysteries in the line included: The Cross-Eyed Bean Murders by Dorothy B. Hughes (#48) with a map of Room 1000 at the Lorenzo Hotel; The Window At the White Cat by Mary Roberts Rinehart (#57); with a ghostly cat on the cover; Ill Met By Moonlight by Leslie Ford (#6 and the second Map Back) with a map of April Harbor, the town that was the scene of the murder; Hunt With The Hounds by Mignon G. Eberhart (#546) with a map of the state of Virginia and Bedford County; and The Accomplice by Matthew Head (#346) with a haunting cover showing a dead beauty in a chaise lounge with the Eiffel Tower outside her window.

Clayton Rawson's Great Merlini mysteries were popular entries in the Dell series. Rawson himself was a practicing magician as well as one of the premier writers of the "puzzle mystery." One of the best Map Backs is Rawson's The Headless Lady (#176) with a cover that shows a gruesome sideshow barker and a back cover map of the Mighty Hannun Show, the circus where the murder takes place. 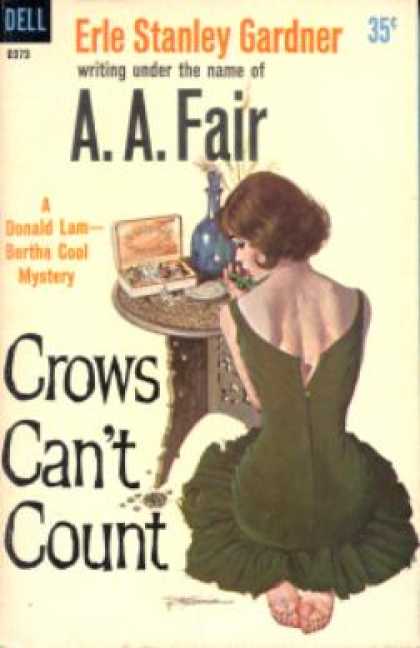 Some writers only had one book in the Map Back series but what books! Cornell Woolrich's The Black Curtain (#208) had a forbidding, darkly atmospheric cover that accurately reflected his fiction. Popular noir icon David Goodis was represented by Dark Passage (#271), with a stark image of a fleeing prisoner on the front. On the back is a map of Irene Janney's apartment, the place the murderer uses as a hide-out in the novel.

Two popular mystery authors had books under pseudonyms in the Dell series. Erle Stanley Gardner, whose popular Perry Mason books were reprinted by rival paperback publisher Pocket Books, also had a separate series reprinted by Dell. This series chronicled the adventures of Bertha Cool and Donald Lamb and was written under the name of A.A. Fair. Crows Can't Count (#472) is one A.A. Fair Dell Map Back. John Dickson Carr not only had books published under his own name from Dell as Map Backs, but also under his popular pseudonym, Carter Dickson. 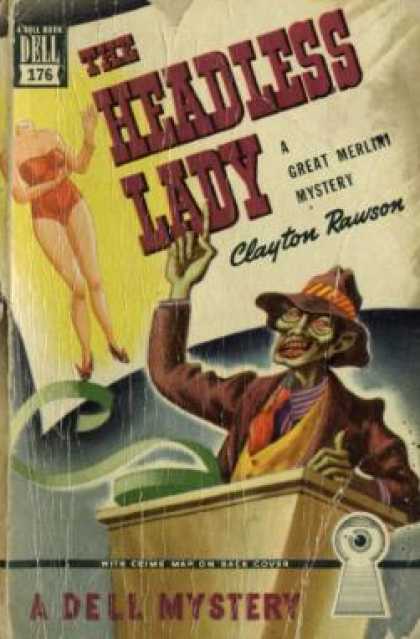 In 1983, William H. Lyles wrote the scholarly and influential Putting Dell on The Map: A History of the Dell Paperbacks (Greenwood Press). Since its publication interest in the Dell series, and especially the Map Backs, has grown. Today these books are collected avidly.

The design and style of the old Dell Map Backs has had a powerful impact upon editors, and publishers. Decades after the last Map Back was published in 1952, the books still influence the paperback market. For instance, in 1987, when IPL Books reissued The Headless Lady by Clayton Rawson, their edition showcased a back cover map drawn by Jennifer Place. This was based upon the original map on Dell Book #176. Then there are the first two books published in 2000 by the small Hollywood outfit, Uglytown Productions. By The Balls and Five Shots and A Funeral, both by Tom Fassbender and Jim Pascoe, are hardboiled satires, but in their design and format they look and feel just like classic Dell Map Backs. These fun books have become collectible in their own right.

By the time you read this article, a new crime novel will be published in the classic Dell Map Back format. A Trunkfull of Trouble (Gryphon Books, 2003) is by veteran mystery author Julius Fast. Fast, by the way, was the winner of the first ever Edgar Award in 1946.

Dell Books published an impressive array of authors. Most of them were popular authors of the 1940s and 50s, but many of them have gone on to become real legends today. These authors and these books are perennially popular. They just don't make 'em like that anymore!