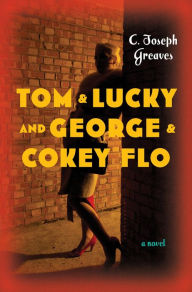 Tom & Lucky (and George & Cokey Flo) is a historical crime novel chronicling the 1936 trial of gangster Charles “Lucky” Luciano, the Italian-American mobster considered to be the father of American organized crime. The narrative begins in 1914 and develops slowly across the intervening 22 years, documenting four characters’ journeys to the landmark trial: Luciano, the politically ambitious New York County special prosecutor Thomas E. Dewey; Luciano’s defense attorney George Morton Levy; and heroin addict, prostitute, and key witness Cokey Flo Brown. Each point of view is unique in voice and style, but Cokey Flo’s is the only one told from the first-person perspective.

The historical detail is rich, and well-researched, but, at times, the information acts as a barrier between story and reader. In an early scene, for example, in which Luciano is attending the 1923 boxing match between Jack Dempsey and Luis Ángel Firpo at the Polo Grounds, Greaves’ description includes a list of 11 names spanning three sentences, with little else relevant to the scene.

The crux of the story is the trial and the relationship between two formidable foes, the mobster Luciano and the prosecutor Dewey. The accounts of courtroom tactics and backroom bargaining is superb, and there are several places where the actual trial transcript is used as a question and answer format. And while Lucky is, without a doubt, a criminal, the ultimate climax of Luciano’s conviction for compulsory prostitution is colored by unease about how it was obtained. Readers will be left with a question of who is dirtier—Thomas Dewey or Lucky Luciano.