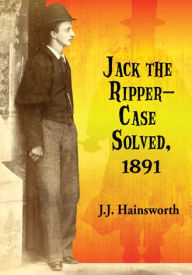 I have read many Jack the Ripper books, some very well written and argued, but this is the first to convince me the 1880s case has been definitively solved, and, in fact, could have been laid to rest 124 years ago. The author, an Australian high school history teacher, does not have a new suspect—barrister and schoolmaster Montague John Druitt, who committed suicide by drowning in the Thames, has been accused in at least two earlier book-length accounts by Tom A. Cullen and Daniel Farson—but he explores how CID chief Melville Macnaghten and his friend, journalist George R. Sims, conspired to cover up the truth after Druitt’s death for a benign reason: to protect family connections of the serial killer, specifically a relative by marriage who was an important police official, from undeserved public ignominy. The book serves to rehabilitate somewhat the reputation of Macnaghten, celebrated for his acumen and faultless memory in his day, but discredited for vagueness and carelessness by Ripperologists ever since.

Sims, whose fame and influence in his own time was immense, created the female fictional sleuth Dorcas Dene. Though J. J. Hainsworth finds the heroine charming, he finds the stories are “marred by a tiresome lack of narrative ingenuity.” He notes that some of them mirror aspects of the Druitt case, as does Sims’ 1892 short story “The Priest’s Secret.” Two other contemporary fictional works reflect some inside knowledge of the truth, one very obscure and of low quality (The True History of Jack the Ripper by Guy Logan), and the other famous and highly regarded (Marie Belloc Lowndes’ The Lodger). Also discussed is Robert Louis Stevenson’s Strange Case of Dr. Jekyll and Mr. Hyde, of which some aspects were adapted by Macnaghten and Sims to help in their misdirection. The book is carefully documented (a dozen close-packed pages of notes), and agreeably written, with many interesting details about the times and the key players. It’s highly recommended despite multiple instances of a linguistic atrocity: the misuse of the concept “begging the question.”