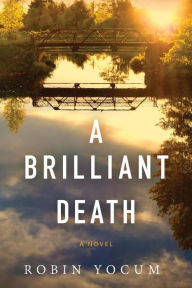 A Brilliant Death is a coming-of-age story told by Mitchell Malone, but focused on Mitch’s childhood friend Travis Franklin Baron. Travis is intelligent and stubborn. He lives with his father, Big Frank Baron, a widely feared bully who has little time for his son. Travis’ mother, Amanda, was killed in a boating accident on the Ohio River when Travis was an infant. The popular story of Amanda’s death is that she and a lover took Big Frank’s boat out on the river and drifted into the path of a barge. The boat was crushed. A man and woman were seen jumping into the river, but no bodies were found and Amanda was never seen again.

Big Frank refuses to speak about Amanda and the townspeople of Brilliant, Ohio, are strangely secretive about her death. During their freshman year of high school, Travis asks Mitch to help him find out more about his mother, a task they dub Operation Amanda. It is a seemingly easy project, but the roadblocks are many, the adventure high, and the outcome is less than ideal for the boys. It includes staking out a cemetery in wait of the mysterious man leaving flowers at Amanda’s memorial, contacting the disgraced detective who once investigated Amanda’s death, and keeping their research secret from Big Frank.

A Brilliant Death’s rural 1970s setting is vividly drawn and populated with interesting characters. Mitch is an ordinary boy with loving parents and friends, and Travis is an underdog from a broken home. The boys’ personal experiences—family, home—are different, but their shared adolescence, with its inherent angst, creates a recognizable landscape and captures an alluring image of humanity. The story is powerful, but as a mystery it is flawed. There is little doubt about Amanda’s fate, and the final climactic twist, while unexpected, is bewildering.