Books
Survivors Will Be Shot Again 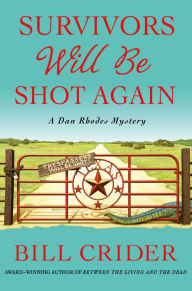 Dan Rhodes, sheriff of Blacklin County, Texas, is enjoying a rare day off admiring the Dr Peppers—a drink he loves, but a drink he has been boycotting since the company quit using real sugar—in the cooler of the local Pak-a-Sak convenience store. His thoughts and temptations are interrupted by an armed robber at the front of the store, whom Sheriff Rhodes stops cold with a gambit involving a loaf of bread, a little muscle, and a bunch of grit.

His day “off” gets worse when a burglary is reported at the B-Bar-B ranch in an especially rural part of the county. There have been several burglaries in the area over the past few months and the ranch has been hit more than once. When Sheriff Rhodes arrives to investigate, the owner, Billy Bacon, seems nervous and is hesitant to enter the barn. Dan isn’t suspicious of Billy’s behavior until he finds a dead man, Melvin Hunt, inside.

Survivors Will Be Shot Again is the 23rd outing for the likable and charming lawman Dan Rhodes. It is a perfectly executed traditional mystery that includes a large list of suspects, well-placed clues, and a genuinely surprising and satisfying solution. And the mystery is only made better by its rural Texas setting, cast of eccentric but relatable characters, and Sheriff Dan Rhodes’ sly wit. If you have not discovered Bill Crider or his Sheriff Rhodes novels, this is great place to start, and for longtime fans, it is welcome chance to get their shot, again.