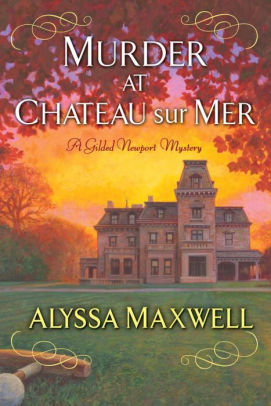 The fifth in Alyssa Maxwell’s Gilded Newport Mysteries (circa late 1800s) finds newspaper society reporter Emma Cross, a poor cousin to the Vanderbilt clan, plying her trade at a polo match. Ever the snoop, she wanders about during an intermission between chukkers, trying to pick up bits of gossip. She hears three men make disparaging comments about George Wetmore, the esteemed US senator from Rhode Island, and she witnesses a prostitute named Lilah trying to speak with the senator’s wife. Lilah is promptly escorted from the arena and Emma thinks nothing more of it until the next morning when her friend, Jesse, a Newport detective, takes her to Chateau sur Mer, the Wetmore’s mansion. Lilah is lying at the bottom of the stairs, dead and pregnant. Mrs. Wetmore asks Emma to investigate Lilah’s death.

Digging into the case takes Emma to a seedy scene at Newport’s wharfs, where she meets many intriguing characters such as Madame Heidi who runs the Blue Moon brothel (Lilah’s place of employment), and a mystery man who rescues Emma each time she stumbles into danger, which is often. Emma begins collecting information on why someone wanted Lilah dead, and who would benefit by planting her death at Senator Wetmore’s door.

Emma is a gutsy, independent gal, and readers will find themselves rooting for her. If they can get through the first few pages with their deluge of characters (27 in the first 15 pages, many of whom play no further part in the story), they are in for a lively romp in true Maxwell fashion—a good mystery with just the right amount of historical detail thrown in.