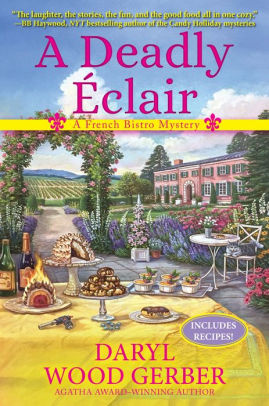 Daryl Wood Gerber, aka Avery Ames, launches a new series with her French Bistro mystery A Deadly Éclair. There are cozies for every taste but the strongest threads seem to be food, needlework, books, and cats. Gerber hits two out of four. Her main character owns a bistro in Napa Valley, California, and there’s a cat skulking around (although not a huge part of the book).

Owner Mimi Rousseau has a charming bistro with gardens themed after Impressionist painters, a fabulous wine list (it’s Napa, after all!), and a humming kitchen operation. As the book opens, Mimi is awaiting the arrival of a celebrity bride-to-be and her wedding party. The bride is the niece of Mimi’s benefactor/investor, Bryan, who believes in Mimi and her business. When Bryan is discovered dead early the next morning, it puts a kibosh on the wedding plans and family secrets begin to bubble up to the top.

Early on, Mimi is the prime suspect in the murder, and the investigator, an old high school buddy, isn’t cutting her any slack. Mimi goes to work on her own investigation despite repeated warnings from the cop in charge to cut it out, but this is an amateur detective novel, so, of course she does not. The layered solution to the crime only comes out thanks to Mimi’s relentless questioning.

There is also a healthy dollop of romance for Mimi involving a hunky wine rep who appears to be getting a divorce from the most gorgeous woman on the planet. Mimi isn’t sure she measures up.

With a dozen books to her credit, Gerber is a seasoned pro and has a very smooth and appealing way of telling a story. The story is told against a gorgeous Napa backdrop, with mouthwatering meals being eaten by characters at every turn. (There’s also a generous selection of recipes in the back of the book.) I tend to like howdunit books that describe the process of cooking or any other skills or processes, and Gerber makes her culinary element look easy. All in all, an extremely pleasant read which serves as a great setup for a new series.