Books
Death in the Stars 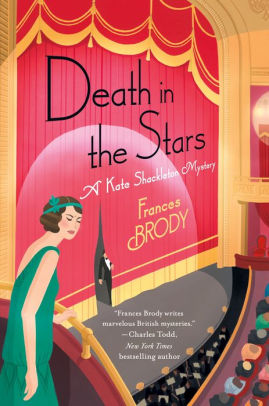 It’s 1927 Yorkshire, England, and British private investigator Kate Shackleton is hired by popular theater singer Selina Fellini to accompany her and her fellow theater troupe attraction, comic Billy Moffat, to a prime location for watching a total eclipse. Kate eagerly accepts the lucrative assignment, although her detective instincts raise concerns that the assignment may not be as simple as stated.

Shortly after the eclipse, Billy is discovered nearby, unconscious and gravely ill with the remains of a cigar next to him. Although his symptoms are initially deemed to be problems related to wartime injuries, Kate’s instincts kick in and she puts the cigar in her purse for later analysis, and finds that he was poisoned. Billy doesn’t recover, and Kate learns that he is the third member of the troupe to die in the past year under unusual circumstances, prompting Selina to ask Kate to stay on as companion/protector.

Is someone killing off the members of the troupe, and if so, why?

With the help of her housekeeper, Mrs. Sugden, and her friend, insurance investigator Jim Sykes, Kate begins looking into the puzzling mystery, interviewing the troupe manager and each of the remaining acts, from acrobats and a strong man to ballet dancers and a memory woman. Her final interview is with Selina’s husband, a man whose face was disfigured in the war. He shuns most people and spends much of his time in a hidden underground tunnel beneath the theater.

This well-written mystery brings to life the old vaudeville era in England, and includes one of the most effective red herrings I’ve ever come across.