“Never tell anybody anything unless you're going to get something better in return.”
—V.I. Warshawski, Deadlock, 1984, by Sara Paretsky 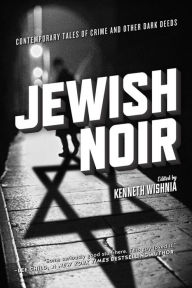 Jewish Noir is an anthology edited by Kenneth Wishnia, who also provides an excellent introduction in which he says, “We wanted a multiplicity of voices in this anthology, and while most of the contributing authors are in fact Jewish, we adopted a generous ‘you don’t have to be Jewish to write Jewish noir’ policy. (See if you can figure out who’s who.)” I wouldn’t presume to know who’s who, but I did spot one byline that tipped me off. Those who know me know that the first story I’d read would be one with the title of “Feeding the Crocodile,” which turns out to be by Moe Prager, who is, at least in the books I’ve read, a non-observant Jew. So I know I got one right. Jewish Noir is a huge volume, with more than 30 stories. The final story, by Harlan Ellison, is one of two reprints, and since it’s an Ellison story, it naturally comes with an interesting and entertaining introduction by the author. The other reprint is from the year 1912, but this is its first appearance in English. It’s “A Simkhe,” by Yente Serdatzky. The table of contents of Jewish Noir is star-studded, to say the least, and while not all the stories are truly noir, they’re all truly well worth your time. This is an excellent anthology.

More than 30 excellent tales from the likes of Harlan Ellison, Yente Serdatzky, and Moe Prager.

"It is not strange. She finds them often. Fresh dead people."