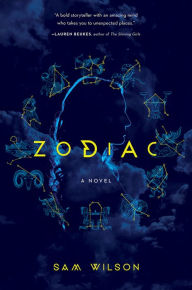 In Sam Wilson’s debut novel, Zodiac, the reader is dropped into an alternate world (and an interesting concept for a thriller) where the astrological sign one is born under determines one’s role in life. Police detective Jerome Burton and astrological profiler Lindi Childs are teamed up to hunt down a serial killer who seems to be using astrology as a means of picking out victims. However, they are stymied by uncooperative fellow cops who don’t seem to want to solve the case correctly. When a second victim is discovered, it inadvertently exposes a secret that threatens Burton’s professional and personal lives.

There is a concurrent story line where one of society’s elites tries to make amends for past misdeeds by teaming up with one of this world’s more undesirable classes of people. The distrust and dislike on each side is detailed quite nicely, letting the reader get a truer sense of the dividing line between astrological “classes.” While the main story is told over a finite period of time, this secondary tale is told over the course of weeks, months, and years. When the stories inevitably dovetail, it makes for an even more fascinating read.

Author Wilson supplies a handy guide to tell readers what character traits each sign is assigned. While the “division by astrology” setup makes for an interesting twist at the start of the book, it is just a stand-in for racism and other societal problems. Perhaps that is how the author intended things to play out on a subtextual level, but it grows tiring. At that point, it becomes easier to read the story as a straight-up thriller. That being said, Zodiac is still an enjoyable tale with dramatic payoffs. Readers will definitely enjoy the hesitant-but-growing working relationship between Burton and Childs and want to read more stories with them.

An alternate world, a police detective, an astrological profiler and a serial killer who seems to be using astrology to pick out victims.