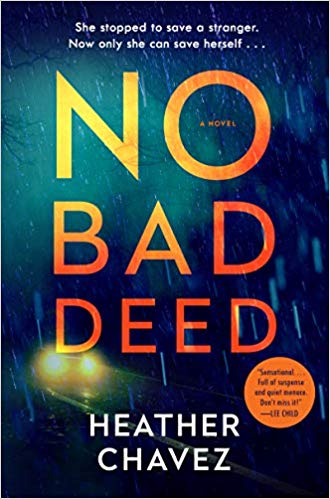 In this debut domestic thriller from Heather Chavez, veterinarian Cassie Larkin fears her husband, Sam, is having an affair. Everything points to it, and she knows she is as much to blame as he. She works late, misses the kids’ extracurricular events, and generally does not give Sam the attention she knows he deserves. On her way home from work one night—late as usual—she interrupts a violent confrontation between a woman and a man. She saves the woman, but before the man leaves, he issues an unsettling threat: “Let her die and I’ll let you live.” He then drives off with Cassie’s van, taking her purse and wallet in the process.

When Sam disappears the next night while trick-or-treating with their six-year-old daughter, Cassie wonders if he’s finally left her for another woman—or if the man from the night before is making good on his threat. Sam is still texting her, but are they really from him? And what do the numbers 3, 2, and 1—which she begins finding everywhere—mean? Soon people who are helping her begin dying, and when threats are aimed at her children, Cassie knows she must figure out who is targeting her and fight back with everything she has.

Author Chavez is off to a good start with this twisty thriller, although her plotting relies on convenient coincidences a little too often. But with her finely drawn characters—impetuous Cassie with her flaws, good-hearted Sam whom everyone loves, and her really villainous bad guys—and a satisfying ending, No Bad Deed is a worthy read.