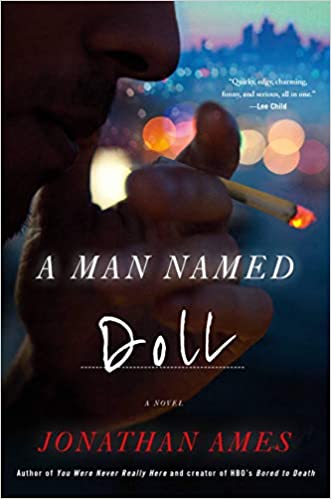 So, the big first surprises for me were that the hero of A Man Named Doll is not Jonathan Ames, doesn’t live in New York, and isn’t even a writer. Nope, he’s an honest- to-goodness private eye.

And what a private eye! Ames’ obvious affection for the yellowing pages of old pulp fiction and the flickering images of classic black-and-white detective films merge nicely with his own cockeyed and thoroughly post-modern mojo into a bracing blend of old and new. And it makes for one potent potential series debut.

Ex-Navy and ex-LAPD, Happy Doll (blame his dad for the boynamed- Sue moniker) is low-hanging fruit on the PI tree. He’s barely scraping by, reduced to moonlighting as security at the Thai Miracle Spa massage parlor, as his life slowly implodes, mostly from his own inertia. He tries not to drink too much and keeps his appointments with his therapist, Dr. Lavich, but his get-up-and-go has got-up-and-gone. He can’t even summon up the courage to ask out Monica, a bartender at his local bar whom he clearly adores.

His saving grace is that Happy’s a stand-up guy—decent, conscientious, and loyal to his friends. And he clearly loves his feisty little mutt, George, with whom he lives in the shadow of the Hollywood Sign in a bungalow bestowed on him years ago by a grateful client—back when he had clients.

Then a bad night at the Thai leaves him with a dead customer and a broken face, and the next day his old friend Lou shows up at his front door, just in time to bleed out from a gunshot wound. And that’s just the beginning. Soon the bodies start piling up. Happy, his battered face sporting more bandages than Jake Gittes and popping Dilaudid (aka “the good stuff”) like it is going out of style, sets out to “do something” about his murdered friend.

It’s all safe, familiar, middle-of-the-road, hardboiled schtick, until about two-thirds in, when Ames heads for the ditch, and goes all Grand Guignol on us. Horrid, bloody, wrenching things ensue that shouldn’t happen to a dog.

Happy may work at a tug-and-rub joint, but there’s no real happy ending here. It is a promising one, though, and satisfying, if you’re not afraid of plowing through the dark stuff to get there, and bodes well for a possible sequel. Let’s hope so.