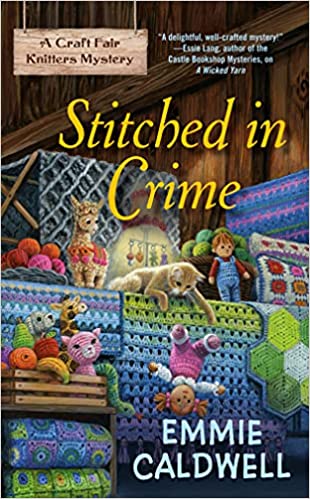 The second in Emmie Caldwell’s Craft Fair Knitter series, Stitched in Crime, finds series heroine Lia Geiger at her weekly craft fair. She’s selling goods next to a new crafter superstar, Cori Littlefield. Cori has just been featured in the local paper and her crocheted works are drawing lots of attention. Lia enjoys the shy young woman and respects her work. When Cori is discovered dead a few days later, apparently by her own hand, Lia’s Spidey senses go into overdrive. She’s sure it’s not a suicide and feels compelled to investigate.

Lia is a retired, sixtyish nurse and shares a tiny house with her daughter, who has just moved back home. Her daughter is busy planning a huge fundraiser at the alpaca farm where she works. The two intersect both as mother and daughter and as knitter and alpaca wool provider. For those who love knitting, this book is nicely stocked with fun knitting details.

While this is a gentle, pleasant read, the opening scene is thriller-worthy, as the reader discovers what caused Cori to become the anxious person withdrawn from the world that she now is. It establishes Cori’s character and sparks the reader’s curiosity as to just what it was that Cori witnessed as a child.

Lia’s questioning gets the police chief and a rookie cop (who happens to be her daughter’s boyfriend) to urge her to lay off and accept that Cori’s death was just as it appeared. But Lia, like any good mystery heroine, won’t stop digging for clues, sharing details, and gaining insight from her knitting group. The denouement is almost as dark as the kickoff scene, but it’s a satisfying wrap-up to a well-told story. It’s also character based, which is a strength of cozy mysteries in general.