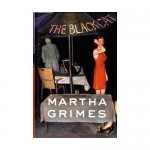 The Black Cat is the 22nd in the Jury series and, like the others, the title is named after a real British pub.

So what could be more appropriate on this Fourth of July that recognizes this country’s independence but to mention an American-born author who writes British mysteries? As a dual purpose, this also recognizes that Britain is now our closest ally.

And here’s a few things you may not know about Grimes:

She began her writing career as a poet but switched to mystery writing because her poems were always filled with mysterious strangers, murders, and unexplained violence. She also won the “Best Poem” competition at the University of Iowa’s Poetry workshop on a bet by a friend.

In addition to 22 Jury novels, Grimes also has written nine other novels. The next novel she is planning will be in her Emma Graham series, a follow-up to Belle Ruin.

Grimes keeps her professional life in the family. Her only son, Kent Holland, also is her publicist. Married and divorced in the 1960s, she never remarried.

Outside of the United States, Grimes’ novels are most popular in Germany and also sell quite well in France. But Grimes said she has no idea why. “I really don’t know the answer, I wish I could,” she told me via e-mail.
martha-grimes
1454