The Girl Who Kicked the Hornet's Nest 3 Stars
Oline Cogdill 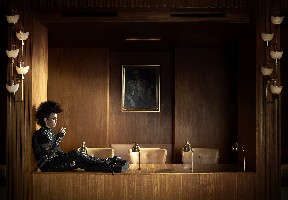 If Stieg Larsson had lived, who knows which direction his novels about punk hacker Lisbeth Salander and journalist Mikael Blomkvist would take.

Certainly the late Swedish author left a magnificent legacy in his three novels, which have been re-created, as faithfully as possible, in three outstanding movies.

The film version of The Girl Who Kicked the Hornet's Nest, directed by Daniel Alfredson, has just been released in American movie houses.

It also follows the standards set by the other movies in this series—taking a brilliant, yet flabby novel, paring it down to a tight, brisk-paced film that captures the nuances and spirit of Larsson’s trilogy.

It's not often that the movie version is equal to, or in some cases, better than the novels. But each of the movies has achieved this. Mainly because each of Larsson's novels could have used a good editor. The Girl Who Kicked the Hornet's Nest is 576 pages; it would have been a stronger novel it had been 450 pages.

At 2 hours, 28 minutes, the film The Girl Who Kicked the Hornet's Nest is still a bit long, but the plot holds up so well that it moves briskly, even with English subtitles.

The movies work mainly because the superb performances by the leads—Noomi Rapace as Lisbeth Salander and Michael Nyqvist as Mikael Blomkvist. The chemistry is no less charged in The Girl Who Kicked the Hornet's Nest even thought the two share little screen time and Lisbeth is confined to her hospital room for a good portion.

The Girl Who Kicked the Hornet's Nest picks up immediately after The Girl Who Played With Fire. Lisbeth is being whisked via a helicopter to a hospital after being shot in the head by her father, Alexander Zalachenko (Georgi Staykov), a former Soviet spy turned sex trafficker with powerful friends in the upper echelons of Swedish government. Lisbeth seriously wounded, but didn't kill, Zalachenko with an axe.

As Blomkvist tries to find proof of a government conspiracy that sent Salander to a psychiatric hospital when she was 12 to cover up Zalachenko's existence, those in power try to have Lisbeth put away for good or, killed. They also want to stop Blomkvist and his team of journalists. Too many movers and shakers would be harmed if proof ever leaked of their trafficking in girls. Blomkvist has to find the evidence as Lisbeth is put on trial for attempted murder.

Meanwhile, the homicidal Niedermann (Micke Spreitz), Salander's half-brother, is on a killing spree.

Rapace continues her excellent performance. In the hospital cell, sans the usual swaddling of punk, black clothing, chains and spikes draped and impossibly high platform boots, Rapace shows Lisbeth's vulnerability and intelligence. But Rapace delivers Lisbeth's fierceness and her rage when she puts on that punk armor for the courtroom scenes. Lisbeth is in high Dragon girl mode, ready to do battle against evil. Once again, she's a solider fighting against men who harm women and this is her uniform.

Larsson had planned The Girl With as a series of 10 novels. Meanwhile, we'll have to settle for the three brilliant novels and the movies that capture their spirit.

I'm trying to ignore the fact that these movies will be refilmed with Hollywood actors.

As for the novels, they continue to have a life of their own. On November 26, Knopf will publish a boxed set of Larsson's three hardover novels and a nonfiction book called On Stieg Larsson that is a new volumne of correspondence with the author and essays about his work.