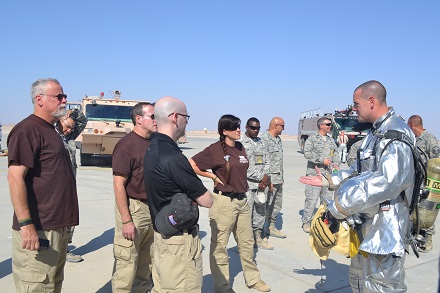 Brad Meltzer traveled half way across the world to meet a soldier who lives near his Fort Lauderdale home.

Michael Connelly squeezed in an extra book tour before his scheduled tour for his new novel The Black Box kicked off.

Joseph Finder tried on a “fire proximity suit" to learn how a solider would crawl through a jet-fuel fire in a C-17 cargo plane.

These authors’ book tours have taken them around the world to meet readers and to discuss his work.

But a few weeks ago, Meltzer, Connelly, Finder, along with Kathleen Antrim and Andy Harp, went on their most unusual book tour. 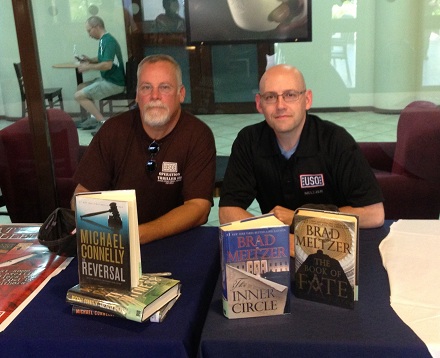 At each stop, the authors talked with the troops, distributed copies of their novels, and gave dozens of servicemen and women com- memorative coins of appreciation from the International Thriller Writers.

“My bag was a proud 75 pounds, but it was worth it. Amazingly, lots of the troops had our books with them,” said Meltzer in email to me.

“Meeting someone who read my books in Afghanistan, on the warfront, it's just humbling to think that at that great moment of stress, you're what they use to find some semblance of calm,” said Meltzer, whose novels include The Inner Circle, The Book of Lies and The Zero Game.

In addition, the authors observed military demonstrations and toured flight lines. “They let me sign a plane,” said Meltzer, the host of Brad Meltzer’s Decoded on the History Channel. “I've signed lots of books. I've signed iPads and Kindles. But a plane! A C-17 carrier.”

The tour was scheduled just before Connelly was to begin his United States appearances for his latest Harry Bosch novel, The Black Box. Yet he didn’t hesitate to join the other authors.

"We write about characters who stand up for others even at great risk to themselves. Now we get to meet real people who do that for us in real life on a day in and day out basis. If nothing else, we just want to say thanks," Connelly said in a press release.

This is the third year that the USO (United Service Organization) has sent mystery writers to visit the troops in the Middle East. Unlike most book tours, the USO trips are kept secret until the writers return. Aside from family and a couple of close friends, the authors and their publishers did not publicize the trip for fear the authors would become targets. Despite this, the troops were allowed to post on Facebook photos taken with the authors after they left each base.

“This tour isn't about authors. It's about our troops, hearing their stories, and being able to give back to those who sacrifice so much for us” said Kathleen Antrim, author of Capital Offense. 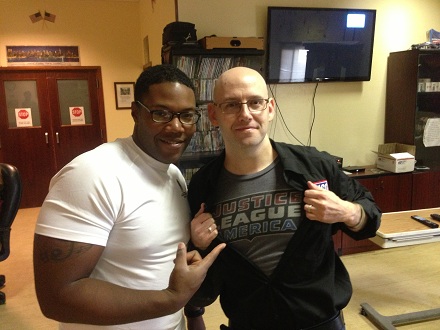 Meltzer has been involved the USO for more than a decade, ever since he received a letter from a soldier stationed on a submarine. “He'd read one of my thrillers. He just wanted to say thank you for entertaining him.” That started Meltzer’s involvement with the USO and through the years he has donated more than 40,000 books sent to troops in Afghanistan and Iraq. “I jumped at the chance to go say ‘thank you’ personally.”

Visits with the troops gave the authors many compelling moments. A visit to the Wounded Warrior Project where injured soldiers are treated gave Meltzer his most vivid memory.

“Inside, I found Isaiah. He said he was from South Florida. Just like me. It didn’t take long to realize that he lived right by my hometown in Broward (County)—and that he once worked on the same exact campus where my kids went to school,” said Meltzer. “I almost fell over. I travel halfway across the globe and happen to run into the one soldier who I could’ve seen at the local Chipotle?”

During their talk, Isaiah told Meltzer that he liked to read comic books, especially the Justice League of America, which Meltzer writes.

“Staring him straight in the eye, I opened the USO shirt that I was wearing, slowly revealing the shirt I had on underneath: a gray one with the words Justice League in big red, white and blue letters. I wasn’t supposed to be wearing that shirt. That morning, I had run out of white undershirts, so I grabbed the Justice League one out of pure happenstance. And yes, there I was, on a USO tour in an undisclosed military location, where I was wearing the exact T-shirt for the exact comic book that this young soldier, who lived near my exact neighborhood and worked at my kids’ exact school, happened to mention.

“I also happened to be carrying in my backpack a copy of Justice League, number one. The USO asked us to bring our novels to give out. I also brought a comic. Just in case,” he added.

“And as for Isaiah, [because of] his injury, he could’ve chosen to be discharged. He was hurt enough that he could’ve come back home. Instead, he asked to return to the fight. He’ll be going back to Afghanistan soon.

“I write about heroes every day. But there’s nothing like traveling the world and meeting our troops: the real life supermen and superwomen,” said Meltzer. 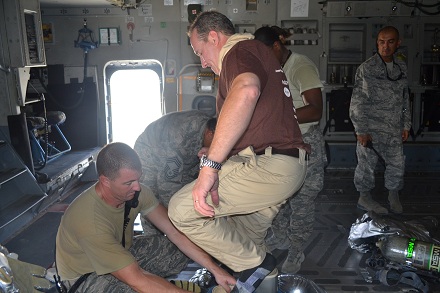 One of Joseph Finder’s enduring memories was trying on a “fire proximity suit in the immense belly of a C-17 cargo plane. It took three soldiers to get me into this thing, which looks like a space suit. On the outside it's silver colored, an aluminized Kevlar, I think. You breathe using an oxygen tank. They showed me how to crawl through a jet-fuel fire, flattening myself onto the floor of the aircraft, where in a fire it's least hot," Finder said.

“The suit will protect you from temperatures up to two thousand degrees Fahrenheit—but only for a few seconds. The members of the aircraft rescue and firefighting unit have to drill regularly until they can don the suit in not much more than a minute. These airmen were one short flight away from deploying in Afghanistan, where—next time—it wouldn't be a drill,” added Finder whose novels include Buried Secrets, Vanished, Power Play, Killer Instinct, Company Man, Paranoia, and High Crimes

But Finder’s most “most indelible image” occurred during the last night of the tour at the Incirlik Air Base in Adana, Turkey. “This was a black-tie, full-dress-uniform “dining out” held in an aircraft hangar converted into an elegant banquet hall, with tables draped in white cloths. Looming just outside was a Boeing KC-135, an enormous aerial-refueling jet. An amazing sight,” Finder said in an email to me.

“And then, in the front of the hangar, dwarfed by an immense American flag that must have been fifty feet high, stood the base commander, Colonel Christopher Craige. There was something eerily familiar about this tableau. After a while it came to mind: the opening scene of Patton, in which Old Blood and Guts, General George Patton, delivered that profane, egomaniacal speech to the Third Army.

“But Colonel Craige was being roasted that night, and he took it in the spirit of good fun. Nothing Pattonesque about it at all, as it turned out."

Since their return, many of the authors mentioned they continue to hear from the troops they met. “A few of those relationships are truly treasured. Just happy to hear they're safe,” said Meltzer.

And Meltzer said the experience has changed the way he may approach his future novels. “I'll never write my heroes the same way again,” he said.

A portion of this column appeared in the Sun Sentinel.