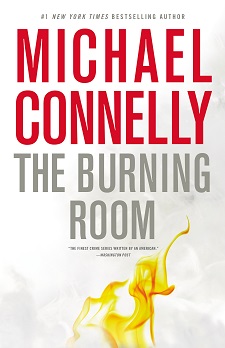 Michael Connelly’s plots are filled with gems as the author gives us insight into police work and the vagaries of life in Los Angeles.

Connelly’s latest, The Burning Room, looks at politics and how it can become a part of a police investigation, especially when a high-profile case is concerned.

Quoting from my review, “The Burning Room excels as a look at how power, prestige and the media can override the best intentions. Connelly also weaves in a bit of the immigrant experience that helped shape—and continues to mold—Los Angeles.”

And within this gem of a plot, Connelly also adds a couple of other smaller gems to his 19th novel about Harry Bosch.

While waiting for a plane to take off for a trip back to L.A. after interviewing a witness in Tulsa, Bosch passes the time by listening to the soundtrack from a documentary about saxophonist Frank Morgan.

Connelly knows a lot about the film, Sound of Redemption, about the late jazz saxophonist, Frank Morgan, as he was one of the producers. Connelly chronicled the filmmaking on its own Facebook page. Sound of Redemption was recently shown at the Palm Springs Film Festival.

“It’s a form of creativity I was not familiar with. It is a tribute to someone who inspired me and is a great story,” Connelly told me for a profile in Mystery Scene.

Connelly pays tribute to his journalism background by having reporter Jack McEvoy (The Poet) work for Fair Warning, an investigative website devoted to reporting and consumer protection investigations that is based in Los Angeles.

We’ll have to wait until the end of 2015 for another Connelly novel.

But the Amazon Original Series Bosch based on the Bosch series will be coming to Amazon Prime Instant Video. It will star Titus Welliver as Bosch, and co-star Annie Wersching and Jamie Hector. Connelly’s website has a couple of clips on this series.