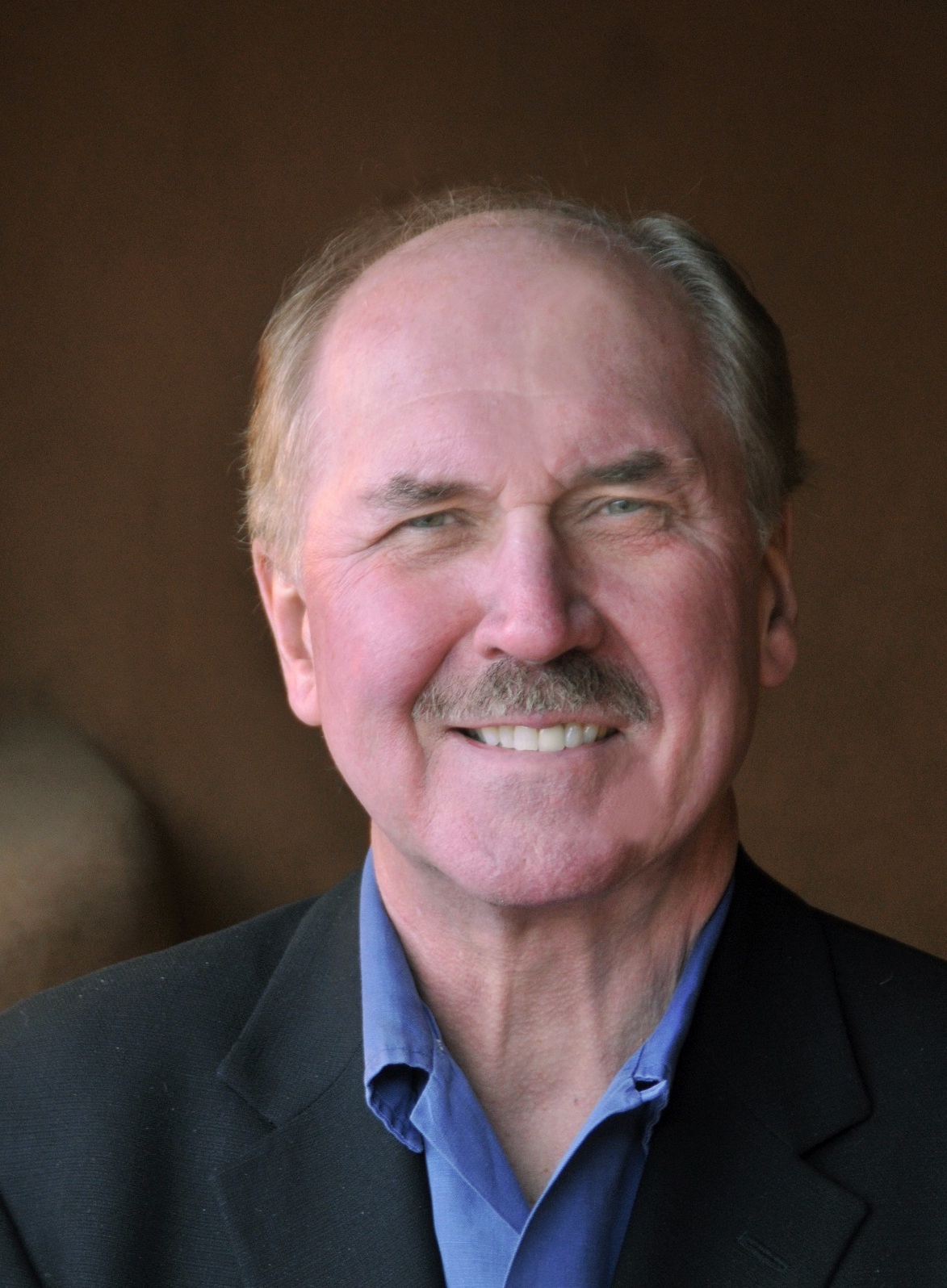 When David Morrell was a lonely four-year-old, his mother asked him if he would like to go out and play with other children. Thrilled, the boy agreed, and soon the two were in the car headed toward what appeared to be a popular playground. It wasn’t. The “playground” was an orphanage, and as soon as Morrell ran out to join the other children, his mother drove away, abandoning him.

Every writer works from a dominant emotion,” Morrell says, from his home in New Mexico. “Mine is fear. When my mother and my stepfather fought—he was a violent man—I’d hide under my bed and tell stories to myself to chase away my fear. In the orphanage I’d tell myself stories to cope. Today I still tell stories in order to deal with whatever hell comes around.”

For years Morrell has shared his storytelling skills with a vast readership. His 28 novels cover an extraordinarily broad range of material, from standalone thrillers such as First Blood, which created an entire genre to The Shimmer, a take on the mysterious Marfa, Texas, lights to Creepers, a look into the phenomenon of urban explorers to espionage novels like The League of Night and Fog, and even his six-part Captain America comic books. He has also written several nonfiction books, including The Successful Novelist: Lessons from a Lifetime of Writing, and Fireflies: A Father’s Tale of Love and Loss. 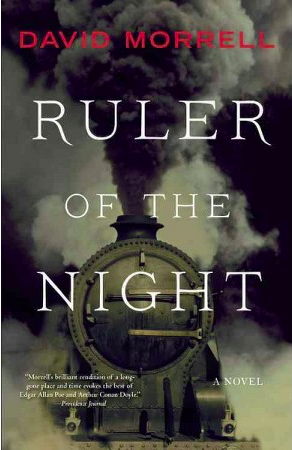 Now he adds a historical trilogy to his list of literary achievements. Morrell published Ruler of the Night in November 2016, the final installment in his Victorian-era based Thomas De Quincey series (after Murder as a Fine Art and Inspector of the Dead).

The idea for three books revolving around a real-life opium addict came to Morrell during an especially rough time in the author’s life. His beloved granddaughter had just died of the same rare cancer that had felled his son years earlier. Grief-stricken, Morrell attempted to heal his scarred soul by retreating into yet another story—this one an escape into 19th-century London.

“I was emotionally adrift,” he admits. “Immersing myself in that time period gave me a portal of escape, so I began researching De Quincey, who had written Confessions of an Opium Eater. The opium was his way of dealing with life. But for me, focusing on Victorian London enabled me to remove myself from the present day and all its present misery, so for years the only books I read were about De Quincey and his era.”

Morrell first used De Quincey as fodder for a short story, “The Opium Eater.” But when he decided to make De Quincey the protagonist of a full-length novel, and then an entire trilogy, he knew he was taking a chance. Would readers who had come to love his modern-day thrillers follow him into an entire series about a drug-addict who solved crimes more than a hundred years ago? The answer turned out to be a rousing yes, and Murder as a Fine Art, the first book in the series, shot to the top of the bestseller lists. One of the reasons for its popularity was because Morrell—whose female characters are as smart and strong as his male characters—had discovered a secret weapon: De Quincey’s daughter Emily.

“Emily was the key to everything,” Morrell explains. “In life, she was his caretaker, so in the books there is a Holmes and Watson quality to their relationship. Writing Emily was such a mysterious process because it was like she was speaking to me over my shoulder and—I wasn’t prepared for this—she was hilarious! Although she deeply loved her father, she was irreverent and independent, and she dearly loved to debunk those so-called Victorian ‘experts’!”

Emily’s strength doesn’t mean she overshadows her father in the books, because despite De Quincey’s ongoing drug problem, he was not only brilliant, but ahead of his time. “De Quincey’s writing showed that he had anticipated Feud’s theories about the unconscious as far back as 1821,” Morrell says. “The opium had been giving him nightmares and he was trying to figure out exactly where those nightmares originated. He realized that the human mind consists of chasms and sunless abysses in which alien natures could hide undetected. During the Victorian Age, the police force had become proud of its increasingly scientific bent: footprints and fingerprints and the like. But there was De Quincey, talking to them about Kant and the nature of reality.”

As usual, Morrell’s research into his subject matter paid special attention to not only the big events (one of them being an assassination attempt on Queen Victoria), but also the smallest of details.

“You persuade readers they are in a particular historical environment by carefully chosen bits of research, such as the faces on the coins a character is carrying in his pocket. Another small bit I learned was that a well-born woman’s clothing weighed 37 pounds! I also learned that Queen Victoria’s mother put sharp sprigs of holly under Victoria’s collar so that the only way she could avoid getting stung was to stand up straight.” 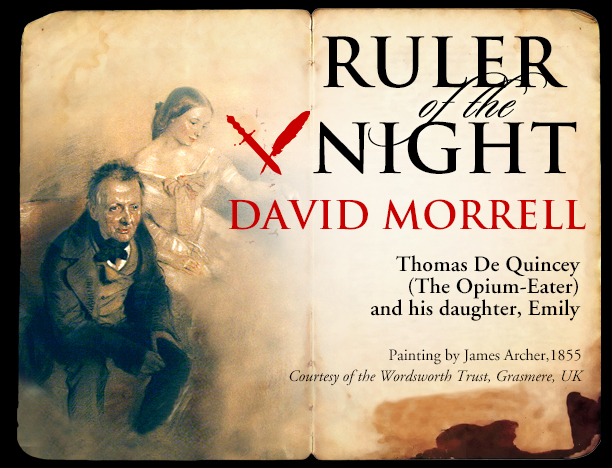 Ruler of the Night, Morrell’s newest De Quincey novel, delves into one of the Victorian era’s most sensational murder cases—the first British railway killing. It was here that the author’s love of detail came to the forefront.

“In those days, when a passenger entered a compartment, the guard locked the door behind him so he could not get out. Ostensibly, it was a safety measure to prevent the passenger from falling out onto the tracks. Unfortunately, one man wound up in a compartment with a murderer, and the poor guy couldn’t get away because he was locked in. At the end, the killer kicked open the door and threw the body out, spraying the en- tire side of the train with blood. People were horrified. This had never happened before, and for a while it shut down everything. No one wanted to ride trains anymore.”

Details as horrific as a blood-smeared railway car roaring down the tracks, or details as small as the coins in a man’s pocket, have always been hallmarks of Morrell’s writing. And it has been by hard-won design. Early on he obtained a pilot’s license to make his thrillers’ aerial scenes realistic. Other books required even more specialized knowledge. For Testament, he took a wilderness survival course from the National Outdoor Leadership School. For The Fifth Profession he took a three-week course at the G. Gordon Liddy Academy of Corporate Security. For The Protector, he spent three weeks learning how to “car fight” at the Bill Scott Raceway. For the Naked Edge, he broke his collar bone during a knife-fighting course.

These activities may seem at odds for a man who says his primary emotion is fear, but Morrell says they just makes sense.

“After my violent stepfather, the orphanage, my son’s death, my granddaughter’s death, all the stuff that has happened to me, I wake up every morning and ask myself, what fresh hell will happen today? Life is accidental and potentially dangerous and hostile. But we can be prepared for the worst by learning how to save ourselves.”

Words of wisdom, no doubt. But all those self-defense classes aside, for David Morrell, telling stories remains the ultimate salvation.

NONFICTION
John Barth: An Introduction (1976)
Fireflies: A Father’s Tale of Love and Loss (1988)
The Successful Novelist: A Lifetime of Lessons about Writing and Publishing (2008)